Having just been engaged by the Shellfish Association of Great Britain, to head up a two year project to impress upon the UK consumer the need to significantly up their consumption of the sustainable crustacea and molluscs that are harvested from our waters, you can probably imagine that right now, I’ve transcended to a new level of seafood utopia.

And, as my new role involves communicating everything good about the benefits of consuming all those wonderful, chitinous creatures from Pecten maximus to Pandalus borealis, I obviously need to get my facts right and yes, this will involve an intense degree of research.

In the last few years, some of you might have just noticed that I’ve taken my interest and passion for seafood to a whole new level. Whether catching, procuring, writing or talking about native fin and shellfish, the inherent desire to promote the seasonal seafood of our shores grows daily and to be frank, it’s now become a way of life.

Recently, having been shown round my new Shellfish HQ at the resplendent Fishmongers’ Hall on London Bridge, (who’d have believed I’d end up with an office in London, let alone overlooking the Thames), I ventured forth into the city for a little sustenance and ended up just off Piccadilly, ordering a wholesome bowl of Linguine Vongole without a second thought.

Bentleys renowned Oyster Bar & Grill in Swallow Street, has drawn me to its menu on more than one occasion and it’s the ideal place to indulge oneself quietly and decadently without too much fuss and time wasted.

Following a bowl of exceptional spiced crab and mussel broth, the Vongole (con pomodoro) duly arrived and the garlicky infusion of fresh chopped parsley and salty clam liquor, brought forth an aroma only a well-prepared Vongole can achieve.

Palourde clams, now sustainably harvested in the UK in Poole Harbour by the Dorset Shellfish Company are the favourite for this traditionally Neopolitan dish, but as I savoured each pasta-twisted and dripping mouthful, I mused over alternative species that might still do the dish justice, but provide a little seasonal variation.

Suitably sated, and back home in Suffolk, I was delighted to find that Chris, my dependable fishmonger had just taken delivery of some of the finest, blue, South Coast cockles that I’ve encountered in a long while (think Stiffkey Blues). Obviously the sight of those was the answer to my thoughts of the previous day at Bentleys and having greedily relieved him of most of his stock, the scene was immediately set for a Campanian feast.

A handful of cherry tomatoes (whole)

Boil a large pan of salted water for the linguine and cook for 2-3 mins until just al-dente and strain.

In a frying pan, add the olive oil and garlic and allow to soften over a low heat. Add the washed cockles, taking care to inspect first for any that might be open or gritty.

Move the pan to a high heat and add the white wine, chilli parsley,  tomatoes and season. When bubbling nicely, cover with a lid and cook for about a minute or until the cockles have steamed open.

Remove from the heat and add the strained linguine and cook again over a medium heat for 3-4 minutes allowing the tomatoes to cook down. Toss the linguine regularly in the mixture allowing the garlicky, cooking liquor to throughly coat and be adsorbed onto the surface of the pasta. 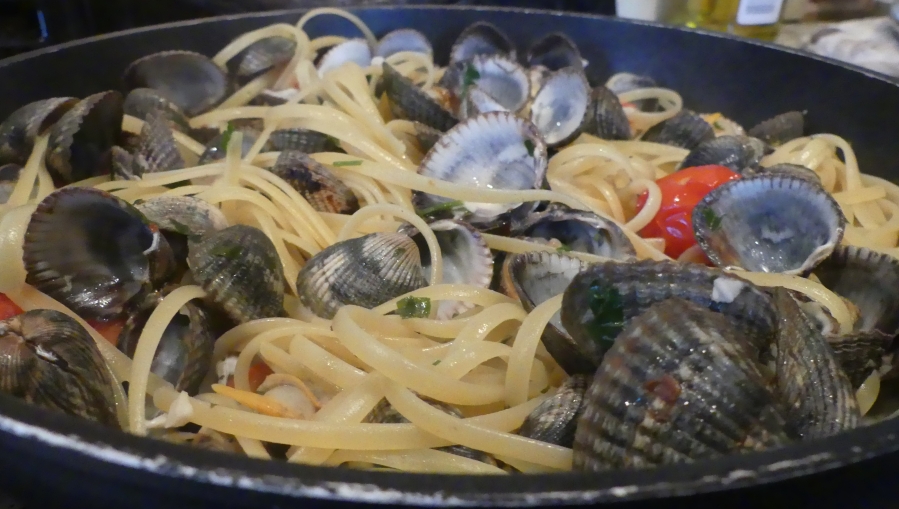 Serve in warmed bowls, garnish with some sprigs of parsley and accompany with something suitably chilled like a Grillo or Catarratto for optimum enjoyment!