I’ve wanted to visit the Lakes for most of my life. Ever since I first followed the squirrels’ journey to Owl Island and the fate of the poor, hapless Nutkin, the images of the mist shrouded waters, margins draped with dense, enveloping oaken foliage, has niggled away at me, instilling a desire to explore a region, which despite having travelled through many times, I’ve never tarried in.

But my chance came recently in awesome and crystallised style, with a stay at a country house hotel lately described to me as the “best thing to happen to Grasmere since Wordsworth”.

Forest Side, a recently and beautifully appointed pile, hewn from local stone, is home to one of the most exciting and locally-sourced young chefs I’ve yet encountered, who through sheer talent and a gift for knowledge of local provenance, has already set out his stall with a Michelin star and is well on the way to securing a second.

His heart set on strong, traceable delicacies, including locally-grazed Herdwick hogget and creel-caught, Dumfries langoustine with herbs and vegetables sourced from the immaculate and McGregor-tended kitchen garden, his mission is to present a menu that reflects, not just Cumbrian flavours, but details a history that compliments entirely, the provenance of his ingredients.

He’s a driven and determined young man is Kevin Tickle and a consummate genius in his domain. Assisted by his tweed-clad front of house crew, he conjured up ten courses for me that not just epitomised the man’s flair for pushing the boundaries with produce sourced from within a tight radius, but utilised every ounce of his passion for perfection.

But that’s not the story here, despite savouring the “Critter Fritter” a delicious concoction of slow-cooked grey squirrel in a herb croquette, served to me with lashings of irony, (their delightful and ousted Red cousins looking on from outside, rubbing their paws with glee). No, there lay an even more tempting story, concerning a fish of ancient and prehistoric origin, lurking ten miles to the South East of us, in the dimly-lit nether regions of the vast expanse called Windermere.

The Windermere char (Salvelinus alpinus) has uniquely dwelt in the colder, deeper climes of both their eponymous lake and its somewhat diminutive neighbour, Coniston, since retreating Pleiostene ice sheets left them landlocked and abandoned to an entirely freshwater existence. Their Arctic cousins, still a free river-returning saltwater species, live a migratory salmonid life out in Nordic waters, but these somewhat cloistered fish with a dwindling spawning biomass, became resigned to a life in the depths of a Cumbrian thermocline.

Once prized for their pinkest of flesh and potted in number for the tables of London society, local fishers netted them by the thousand and by the early 1800’s their numbers were desultory to say the least. Netting now commercially unacceptable, became usurped by the more artisan practice of ‘trolling’ – fishing homemade lures at depth, seeking out the colder, deeper environs, where these silver-flanked icons lurked in ever-decreasing schools.

They have survived though and although numbers will never return to the pre-1700 populations, a fishery of sorts still exists and Chef Tickle is determined to return them to their rightful culinary status. Using every ounce of his guile and determination, Kevin is seeking to reintroduce the char to his menu using but a modicum of fish, sustainably-caught by local hobbyist fishermen in a version of the original char pot and working with neighbouring South lakes ceramicist, Miles Moore in a collaborative meld of history, traceability and invention using the char as the staple ingredient and incorporating fragrances and flavours from the immaculate Potteresque garden at Forest Side. 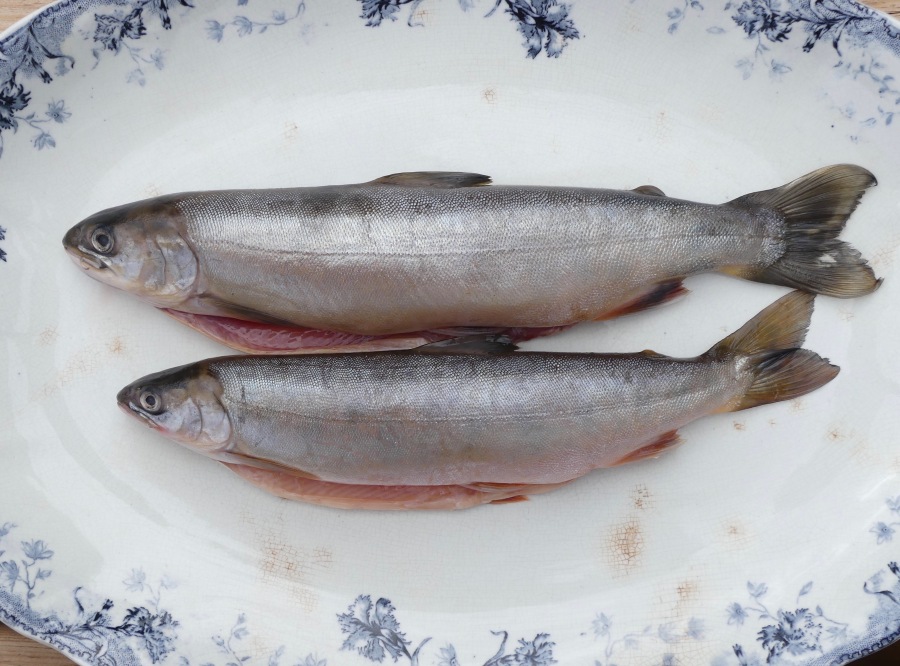 It’s yet to happen, but my trip to the Lakes to witness the ‘hook to plate’ process took an interesting and fortuitous turn, when I was invited out to hunt the char with veteran Windermere lure fisherman Peter Haslam the next day, aboard his lovingly tended 20ft 1920’s clinker-built boat. 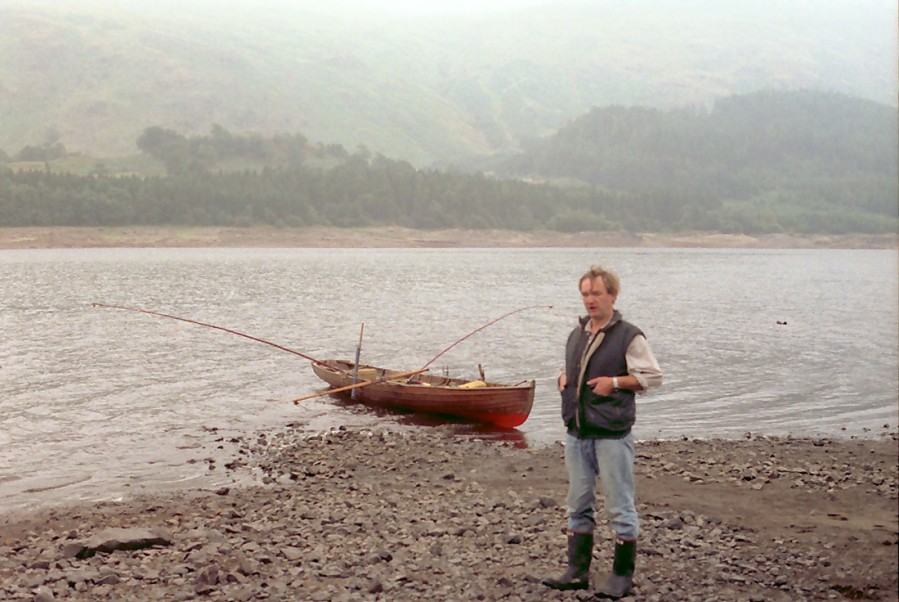 However, albeit with high hopes and the best of intentions, the inconstant Lakeland weather thwarted our access to the water, with waves cresting on Windermere the following morning, mockingly licking the beach. I’ve always had pretty good luck with conditions when venturing forth on saltwater forays and therefore it was somewhat ironic that I couldn’t manage a few hours on a ‘stillwater’.

Nonetheless, a truly fascinating morning spent in Mr Haslam’s kitchen imbued me with with as much shore-based knowledge on char fishing as I could absorb. From the detail of the gear and its cottage-based manufacture, to the technique and deployment, by only a handful of still-dedicated proponents.

Char are undoubtedly an ecological barometer for the health of these waters. An increase in water temperature over time, agricultural pollution via phosphate and nitrate runoff, causing multiple algal blooms and the ubiquitous fuel-spilling water borne activities, have unsurprisingly led to a drop off in their numbers. It’s a loss keenly felt by the remaining 7-8 fishers who, abiding by the terms of their Environment Agency licence, fish diligently and responsibly from March until the end of September (October for Coniston), providing much needed data on the health of the stocks.

Sandwiched between layers of warming and often deoxygenated water, these denizens of the past rarely grow to their ancestors’ size, with specimens at over 2lb, seldom being recorded nowadays. Peter Haslam informs me that with an ideal water temperature of 8C, values of 15C or higher, trigger a stress level for the fish, above which, feeding and spawning become difficult and numbers less likely to be sustained.

So tenuous has the Char’s existence become that Slow Food UK have designated it a ‘forgotten food’ and an at-risk species. In fact, it’s only the data recorded by the fishers on their log books that provide any reliable source of information on how the species is faring.

A truly fascinating morning and one that came to an end all too quickly. However despite my desire to go afloat in pursuit of this incredible beast dashed by the elements, Peter Haslam concluded our session, by presenting me with two frozen, but recently-caught fish, which I could return to Suffolk with to prepare as I sought fit. A generous and satisfying conclusion to a delightful sojourn in a part of the country, that up till now had eluded me.

So here’s my own recipe for potted char, a traditional blend of different takes, combining knowledge, ingredients and experience in a dish of onetime affluent preserves.  I confess that I didn’t bake the char, as described in all but a few of the recipes, but chose to poach, in my antique ceramic kettle, as I first wanted to savour the just-cooked flesh in all its flavoursome lustre and pinkness and I wasn’t disappointed in the slightest!

Long live the Windermere char, “the finest and most delicate of freshwater fish” Larousse, (and I am returning to fish with Peter, when quieter waters preside). 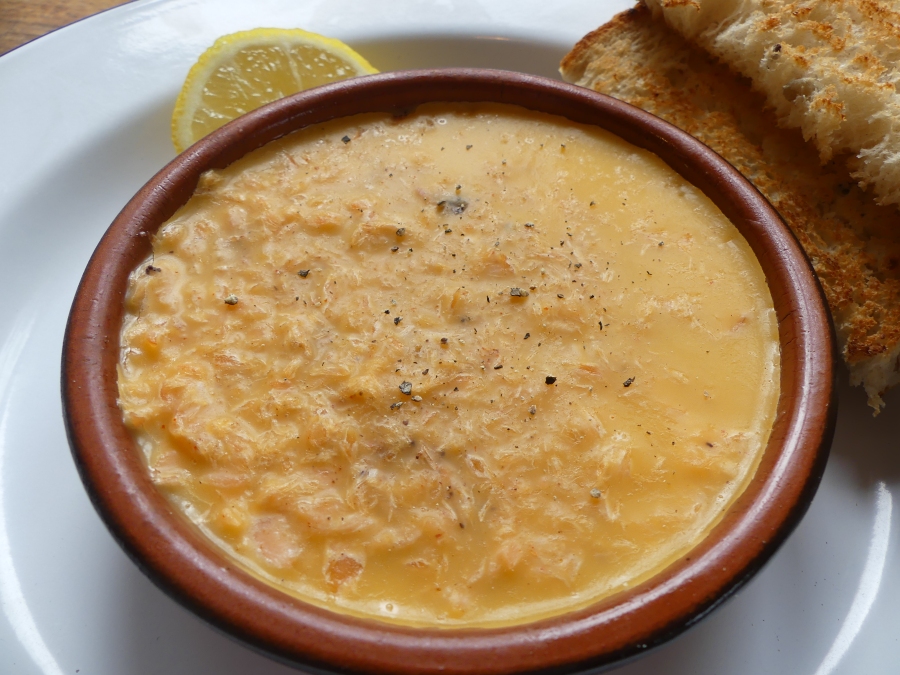 Having scoured the internet and generally cast about looking for leads on char recipes, I concluded that although time-honoured tradition often serves well historically, an amalgam of variations on a theme, might suit my purpose here better and whilst allowing me to indulge my passion for cooking, would culminate in a dish, which, in the likely event of char being unavailable, would work equally well with more readily available wild salmonids i.e. salmon, trout or sea trout.

In my recipe, although the cooking process is different to the then Rector of Windermere’s wife’s 1807 version, (Mrs Barton slow-baked hers), the potting process is much the same with hopefully an identical desired outcome.

Firstly, poach the char in a fish kettle as you would a similar-sized trout, having seasoned inside and out with the sea salt, black and white pepper. Cover with water, add the bay leaves and cook in an oven at, until the eyes of the fish whiten and the flesh is just-cooked, but falls away nicely from the bone. 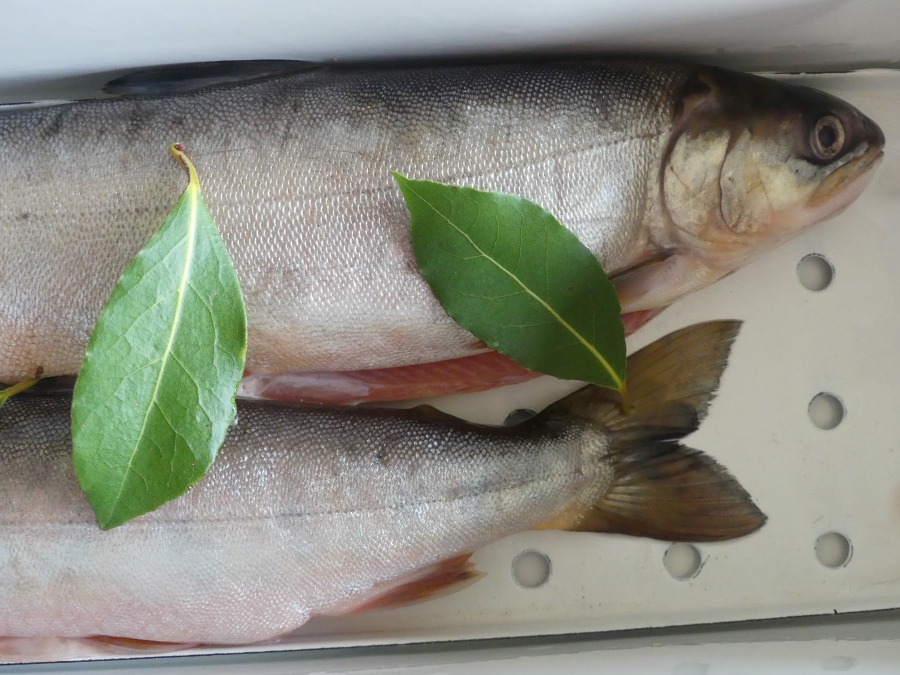 When cooled, separate the flesh away from the frame of the fish using your fingers and check for any more substantial bones. 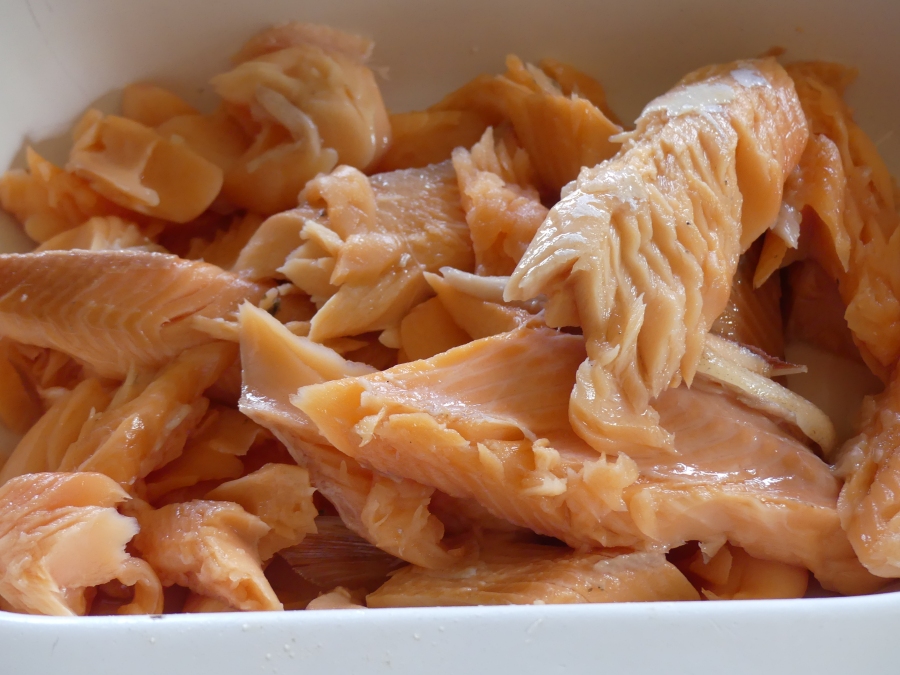 To the warm, clarified butter add the cloves, mace, cayenne and salt to taste and stir slowly over a gentle heat until all incorporated.

Butter the shallow pots and pack the fish flakes down using a fork, compressing the flesh evenly.

Pour the warm spiced butter over the fish, allowing time for it to soak in and top up as necessary. Leave to cool.

Finally top off with a final layer of butter, sprinkle with a dusting of cayenne and garnish with a sprig of chervil (or something suitably aromatic).

Leave again to cool and then refrigerate before serving.

Serve with homemade granary or sourdough toast and a lick of lemon.

Makes an absolutely ideal breakfast or brunch dish or as a starter or canapé.

Huge thanks to Chef Kevin Tickle and the staff at Forest Side for such a wonderful experience and to Peter Haslam for his time, exemplary knowledge and the char fishing photos.