This is fast becoming a regular event in my fisheries calendar. As I tour the coastline, seeking out the stories behind our native seafood and it’s accompanying and exciting provenance, one fishing port lures me back time after time.

I don’t know quite what the deal is with Peterhead – (well I do really). It’s certainly not quintessential Cornwall. No cottage-strewn coves or eclectic eateries. Neither does it possess the charm that draws me like a headlight-struck rabbit to Devon and the mixed landings of Brixham Market. There’s definitely something very different about the granite-hewn “Blue Toon” and it continues to captivate me in a very sincere and beguiling manner. 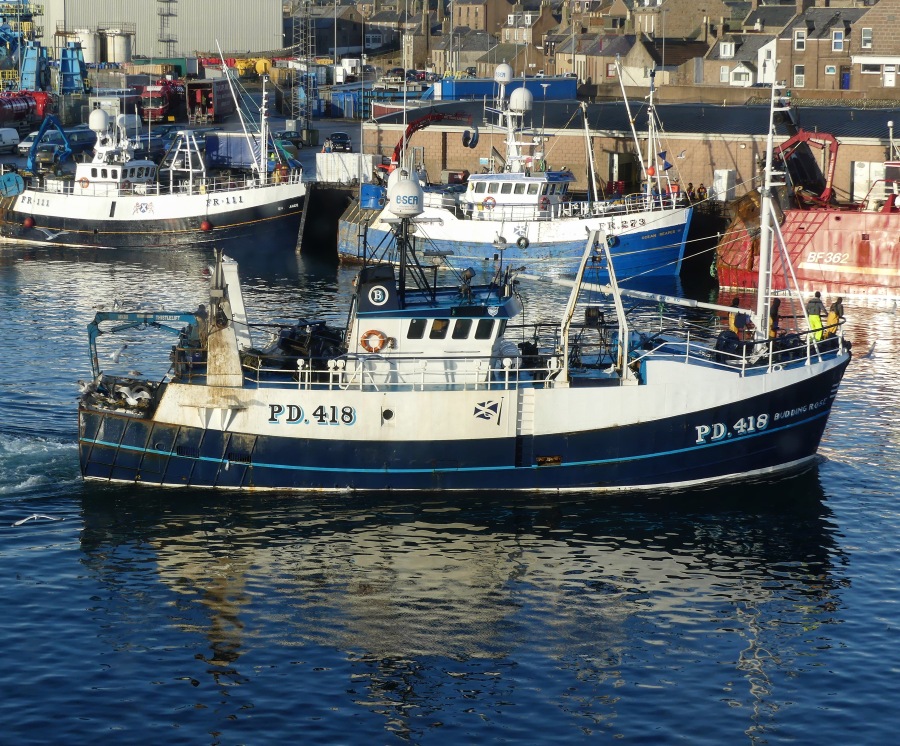 First and foremost it’s not a tourist centre. Jutting out into the wide sweep of Peterhead Bay, this whale-founded, harpooners haunt, still bears the harsh and uncompromising facade of an industry long-since perished, and more recently given way to a more ethical pursuit, namely the capture of white and oily fish, by a race of latter-day hunters, who operate here in what’s can only be described as an industrial microcosm, untouched by the influence of southern whims, with a passion, integrity and commitment, that I’ve found unmatched in any other sphere.

So, whilst lunching recently at the indisputably “happening” Soho brasserie, Randall & Aubin, with co-owner Jamie Poulton, our conversation led, inevitably, to the source of some the favourite ingredients for their inspired and indulgent, French-styled seafood menu. We talked of course of the fishermen, the hardy and ever-distant, spray-lashed figures, who to most consumers, are but intriguing and colourful quayside characters, encountered mostly in the summer climes, and often seen as the heroes and villains of the seas in equal measure.

“Do you actually know these guys?” ventured Jamie, after we’d touched on one of his à la carte faves – the grilled garlic langoustines.

“Oh yes” I replied, with not a touch of self-satisfaction. “As a matter of fact I do.” And thence proceeded to gush forth in as much of a précis as possible, about my travels to the Buchan coast and my dealings with the men there, who venture forth daily, in as dangerous a role, as encountered on earth, to sustainably harvest the rich and abundant waters of the Northern North Sea.

As I recounted my tale, over a salver of Oysters Randall, I could sense that his mind was drifting, slowly building images of the harbour scenes that lurked way to the North of our Isles and the sights and sounds of the bustling market there, the hubbub and din of vessels landing on the fish quay and the infectious aura that pervades the port and gets seriously under your skin.

“I must go,” he announced, with determined and purposeful enthusiasm. “We must go – can you arrange it ?” In a request that needed no further contemplation on my part.

“Of course,” I replied, an eager grin already etching my face. “When shall we leave?”

Two months later and I’m sitting in London City airport departures, anticipating Jamie (and his long time business partner, Chef Patron, Ed Baines’) arrival, at the start of yet another foray to Aberdeen and thence on further to Europe’s premier fishing port.

Our host and guide for our sojourn- none other than the inimitable and charismatic star of “Trawlermen”, Jimmy Buchan, owner/skipper of Amity II, prawn hunter, entrepreneur and fisheries ambassador, who would see to it, that our visit left no stone unturned, in unravelling the mysteries that lie behind the scenes of a modern commercial fishing operation. 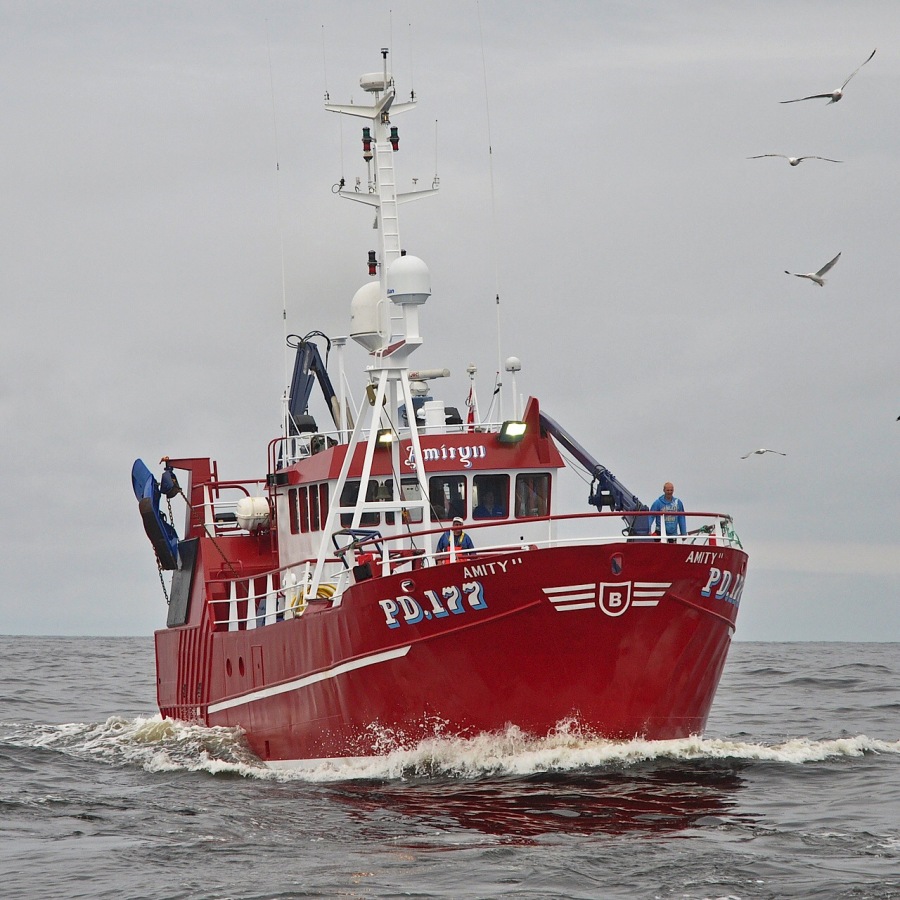 Long before our taxi drops us off at the town’s Palace Hotel, already the guys have been pumping me for info on what lies ahead. I can only relate so much, as until you’ve stood on “Blubber Quay”or “Albert Dock” and imbibed the atmosphere, there’s little point in explaining in detail.

On arrival at Peterhead harbour, you’re presented with a scene that’s being played out in perpetuity and although alien to most, has a warm and vocational zeal, synonymous with most professions engaged with food production. On the Fish Quay, cranes creak and whine, clipped Doric accents bark and holler as boxes crash, ice slushes and fumes from idling diesels twist and blend with the ozonous and punchy sea air, gabbling throngs of gulls wheeling and screaming overhead.

The two restaurateurs stare agog at the sights. Too much to take in without a careful and well delivered explanation. The trawlers ahead of us swarm with oilskin-clad crew each one seamlessly repeating their chores, unloading a continuous stream of ice-topped boxes, that swing precariously from the derricks, clattering noisily to the quay, amidst bellowed instructions from the wheelhouse.

The pair stand transfixed. Too many questions and so little time. Amity’s skipper leads us from the quay to the already filling market that seeks to swell to a gargantuan 7000 boxes of prime North Sea fish by morning. A brisk and buffeting easterly, scuds its way across the harbour and although surprisingly mild for the time of year bids us take shelter.

Once amongst the boxes, our visitors become more animated and Jimmy explains the procedure for landing to the market and how the fish are arranged with the most recently landed at the head of the auction and how some crews take inordinate pride in presentation with the fish dressed neatly for the buyers. They learn that the boats will continue to land overnight and into the small hours until the market, then full and silent, awaits the auctioneers’ shouts and merchants nods and the cycle repeats.

After an earlyish night, (our guide insists he’ll be at the hotel at 0630 sharp), the grey Peterhead dawn cracks dimly and we repair once more to the harbour, where the mandatory market-wear is donned before entering the chilled arena. Stumbling through the doors, we now behold a different sight, to the one we left only hours ago. The market, now fully loaded, stretches away down the vast hall, in conspicuous and ordered rows of white, picked out in detail by the glistening greens and golds of the hauls from a dozen vessels.

It’s a wholesome and gratifying spectacle to witness. A true snapshot of the current health of the North Sea stocks and the continued upward trend of species like cod, haddock and hake to Maximum Sustainable Yield (MSY), which captivates our two intrepid seafoodies.

Having spent two hours in the chill of the market, we repair to the Dolphin Cafe to continue the by now ongoing discussions and revelations. As market goers come and go, invitations to visit processors and merchants premises come in from different angles and endorses entirely the purpose of the visit. Social media opportunities abound and with so many industry individuals, now conversant with Twitter and Instagram, the unfolding story of the Randall & Aubin “Grand Tour” stretches well beyond the confines of the harbour and South to London

On the other side of the harbour, close to where the new £49m port re-investment programme has recently been initiated, we’re invited into local merchant Will Clark’s processing operation where at close quarters we can watch the timeless skills involved in fish preparation, that haven’t changed in many generations. Filleting is an art form, and a good blockman will earn his weight very quickly by ensuring speed of production coupled with minimal wastage, affords a premium for the finished article. 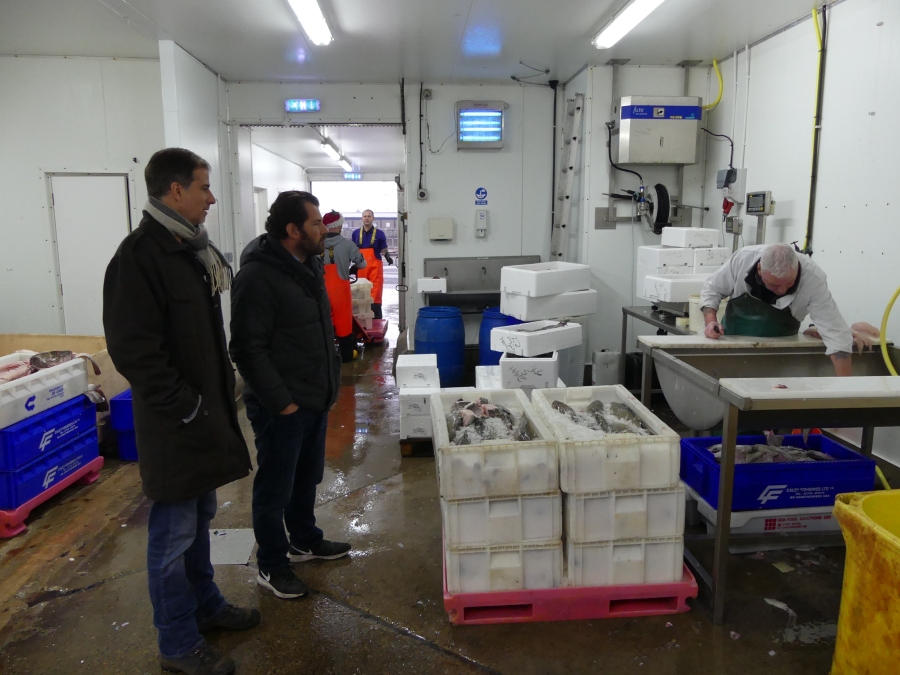 Once again, the sights and sounds of these craftsmen at work, are to the casual observer, perhaps just anathema, but not to those who show their end products, the reverence and respect due on serving to expectant diners, the step by step story of provenance, becoming ever more etched in their minds. Gloved hands grasp the slippery flanks of lolling cod, coley and hake and the snicker of honed steel against boney frame, alternates with the flap and slap of prime fish as they’re expertly handled.

As we linger at the Wilsea plant, more and more questions are generated. It’s undoubtedly encouraging for the “sharp-end” exponents of this incredible profession, that so much interest has been given and time taken to listen to the detail and drama that is so unique to these bastions of the seafood industry.

With the Londoners now suitably conversant with the white fish and shellfish landings, our attentive guide signals another change of perspective and one that sheds light on the other most important fishery that Peterhead plays host to – the Pelagic sector. Oily fish- herring, mackerel and blue whiting swimming freely in the water columns of the North Atlantic, add tremendous value to the port’s sustainability and although fished very seasonally, constitute a highly significant part of the ports landings.

As we board the brand new mid-water trawler and purse-seiner Kings Cross (PD365) the sheer scale of the operation aboard is not lost on the guys. With only a couple of shake-down trips under her belt, she awaits the New Year’s quota reallocation before steaming once more to the mackerel grounds.

Her vast displacement aside, the accommodation, facilities and technology aboard the vessel is awe-inspiring and on meeting her skipper William Buchan, her master at just 23 years of age, the respect is tangible. Will explains in as much time available, the purpose and process of these gargantuan fishers. A whistle stop tour of her decks affords just enough time to get a feel for the engineering and environment with which her crew are still familiarising themselves. 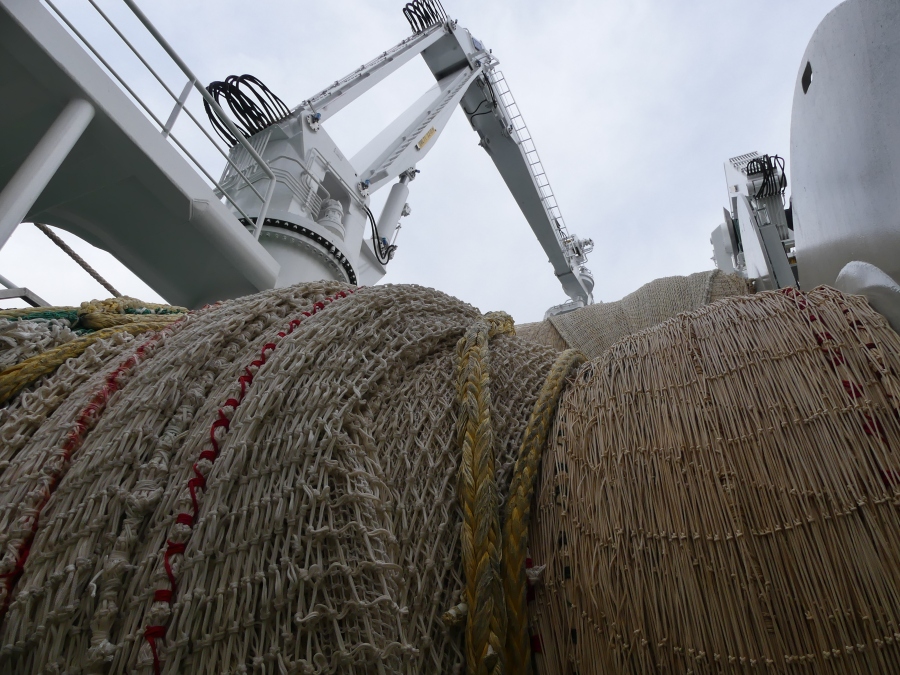 As we’re taken from storage tanks to net drums, wheelhouse to fish pumps and galley to gym (yes gym!), the whole experience leaves us in no doubt that investment of this scale can only be the result of a highly productive fishery. On the bridge, the mesmerising, array of instruments are broadly explained to attentive and captivated ears.

As we continue up the companionways and across the decks, I get the sense that this whole trip has not only fully served its purpose, but has led to a far greater level of understanding, not just of the industry mechanics, but also of those whose lives are dependent on the infrastructure and services that make up the port community here.

A final stop off for hours-landed haddock and chips at the Dolphin, signals the end of our time here and a chance to thank our hosts for what has been as rewarding a venture as I can remember. Jimmy Buchan reflects again, that it’s all about making connections and building relationships, across the poles of a business that ultimately strives for the same tenets.

I’m left in no doubt that this has been achieved. Even before the wheels of our plane have touched back down at London City, the gears of commerce have engaged and 48hrs later a box of hand-picked, 00-sized langoustines, have found their way from the decks of Amity to the plates of Randall & Aubin.

Now that’s what I call provenance!

One thought on “Buchan’s Best”