It’s been a while since I last posted, I know. The passion is there like never before, but just being channelled into so many new and exciting areas, meaning the poor old Avocet hasn’t been fed lately and I must hang my head and put my hand up.

Nonetheless, in the midst of all this seafood shenanigans and me galavanting around the coasts of the UK chatting, eating, writing and generally making a nuisance of myself in fishing ports, I got time last week, to chase a species that I’ve wanted to encounter close up in all its flashing scaly splendour, like never before.

Herring  (from the Teutonic, Heer meaning ‘army’) and fished in the UK for centuries as longshores, silver darlings or whatever geographical moniker you choose, all mean one thing to me and that’s the ultimate in healthy eating with lashings of fish oil, omega 3, laden with vitamins and a delicious and easy-to-prepare flesh that has sustained our islands for generations.

So, armed with my oilskins and sporting my customary Cheshire cat-like grin, I found myself yet again in my element and at sea last week, as guest of local Felixstowe Ferry fishermen and mate, Craig Ablitt, Skipper of the inshore trawler  ‘Hannah Marie’ BD33, bound for the herring grounds, some five miles off the Suffolk coast.

Herring is an incredibly historic species and an important one. In the UK we are very much a seafaring race, although the old adage;

‘Ye gentlemen of England, who sit at home with ease, oh little do ye think upon the dangers of the seas’

runs very true, insomuch as most of us have very little idea of the lives of those ‘whose business lies in deep waters‘. However, for generations, many, many lives depended on such an industry, charged with the harvest of the ‘King’ of the seas,Clupea harengus and all the accompanying trades that ensured supplies of such affordable protein were made readily available to the masses.

So, as we steamed out of the river and past the Haven buoy, I remembered fondly, the aroma of grilling herring in my mother’s kitchen, when nobody though twice about eating fresh fish at least twice or in our case three or four times a week. Kippers, bloaters, buckling, pate, fried in oatmeal, baked and soused, herring certainly featured highly on our menus and for good reason. It was affordable, it was delicious, it was the original ‘fast food’, easily prepared and of course eminently healthy. 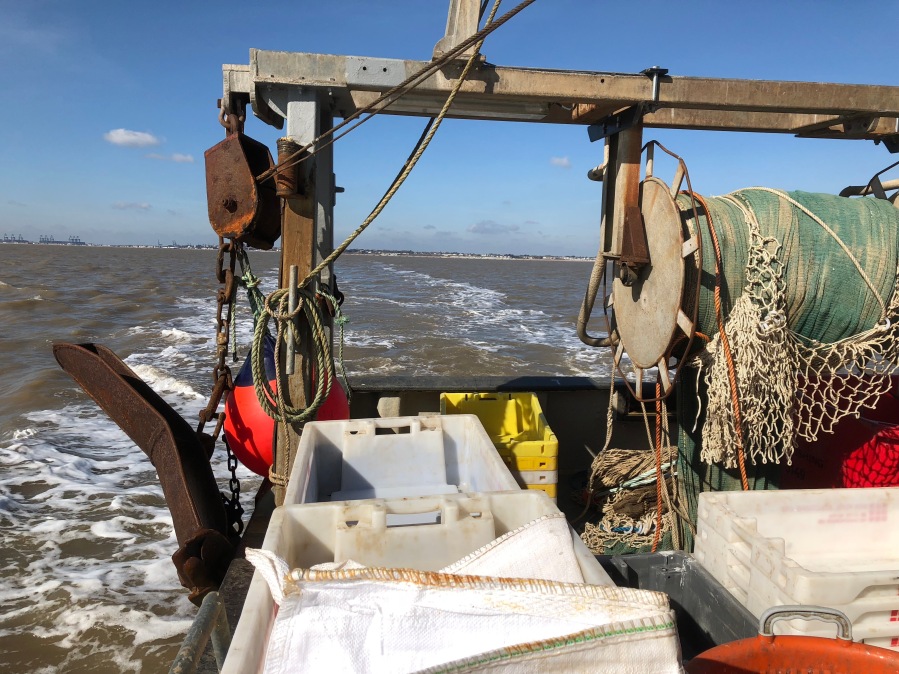 The ‘run’ of herring here in Suffolk starts before Christmas, when the bulging roe-laden hen fish, make their way inshore to spawn. Patrolling the waters in colossal pelagic shoals, they feed on the nutrient-rich East Anglian waters, before shedding their eggs in a vast frenzy and perpetuating their teeming abundance.

By now the fish are somewhat thinner or ‘spent” and although not as good for splitting and kippering, they still make fantastic eating and as we shot our gear just outside of the Felixstowe shipping lanes, I was once again full of anticipation.

So what went wrong? Why do I falter to find seasonally-caught UK herring on a modern fishmonger’s slab?

The British herring fishery pre-dates the capture of many other species and in 1295 Edward I decreed that the Dutch should be allowed to fish from Yarmouth for herring ‘unmolested’ – (not much change there then!!) and of course competition ensued and struggles for the control of the herring fisheries were inevitable giving rise ultimately to the emergence of the Royal Navy as protector of the shoals.

By the mid 17th century, the herring industry was booming and in 1650 the Navigation Act demanded that only British-caught fresh herrings were to be imported to our shores and by 1666 all trade in foreign herring, salted, dried or bloated was prohibited too.

Fishing for herrings was actively encouraged by parliament through the 1800’s and by the early 1900’s a vast industry was encompassing the Isles from Shetland to Cornwall, the Firth of Forth being noted for its abundance. An army of fisher-girls descended on ports and towns to clean and salt the fish down into barrels, from the Orkneys to Lowestoft, following the shoals throughout the seasons, as they migrated South toward the Channel.

Just before the First World War did the fishery peak, with a estimated 1500 herring ‘drifters’ crewed by 15,000 fishermen, landing 12,000,000 cwt of catch. The ensuing turmoil of war then depleted those landings by over half, fishing communities subsequently came under much economic pressure and in 1935 The Herring Industry Board was set up to monitor and manage the markets.

Following the Second World War the demand for protein increased, the fleets reinvested and improvements in fishing techniques and technology increased catches further. By the 1950’s overfishing of herring was a serious problem and landings fell dramatically and steadily right up to 1977, when the lowest catch for a century was recorded, with a spawning biomass (volume of adult herring) of only 150,000 tons and a 4-year ban on their harvesting was the inevitable result.

As we shot the trawl and began our 45 minute tow, I pondered how firstly, such a nutritionally-important species had been squandered, never to return in such commercially viable numbers and more importantly, how in that time the UK consumer had lost their appetite for it as a food staple. Are we so naive as to lose sight of such an important commodity?

So where do we go from here? I can honestly say that I see no reason why in the humdrum of fast, modern living and complex lifestyles, simple, nutritious and  affordable seafood like herring, shouldn’t be considered, especially considering the numerous and obvious associated health benefits of a true ‘Superfood’

I’m on a mission. The King of the Sea, I feel should reign once more. It’s such a fantastic opportunity, but we need to raise awareness and reinforce the message that whenever we visit the coast and gaze out to sea, out there is a heaving Smörgåsbord of top-quality native seafood, which contends with and often surpasses the best in the world. Time to re-embrace……

As Craig manned the winch and the straining warps coiled onto the capstan, gulls began to gather, wheeling and creaking, as slowly but surely, the trawl rose up on the surface.

James, swiftly disconnected the two trawl ‘doors’, and the net began to wind back onto the drum and as the ‘cod end’ sausaged up in the boiling waters astern, I could see the tow had been successful, with a packed bag of herring, gleaming and sparkling in the wake.

As the first shot swung aboard and the cod end knot released, the whole flickering, flapping, flashing and scaly mass spewed into the bin, in a frenzy of blues, silvers and other marine hues. Seeing fish straight from the water is always a moment of sensory overload, but for me this sight is something even I hadn’t prepared myself for. A boiling cauldron of live fish which literally had me transfixed.

There’s not a whole lot of time for reverie aboard a trawler and although fascinating, the reality is that the hard graft starts here and elbow-deep in flashing silver and cobalt, James began the arduous take of basketing the catch into waiting boxes as errant and loose herring skipped and skittered around my seaboots.

I joined the fray, the feeling of being part of an age-old sea-harvest, imbuing me with nothing but profound respect for this last bastion of hunter-gatherers. With oilskins cloaked in scales and more boxes to be filled, we continued the task until three bags had been swung inboard and emptied and thirty five boxes filled. A very satisfactory haul of such an emblematic and important species.

With impending ebb tide not allowing us another tow, lest we missed our chance to get back into the river, we steamed for home and the rather testing job of transporting all the packed boxes ashore from the mooring. No landing facility, harbour wall or pontoon at the Ferry. The fishermen here have the most dangerous part of the job left to complete. Landing their catch, all by dinghy, often rowed ashore in the dead of night, alone and with just a hissing tide for company.

Commercial fishing in all its stark and unforgiving reality.

But herring we have and as Craig prepared to drive the catch the forty miles onward to Lowestoft Market, my thoughts turned to cooking and how I might best serve up these Silver Darlings, several of which had unsurprisingly made their way into my cool box. Fried, grilled, smoked or soused? Or perhaps just a bit of each.

Fish like this, so intensely fresh and brought directly from ‘net to plate’ is an absolute joy to behold and I realise that I’m incredibly privileged to be in the position I am and to be able to witness the whole journey. However, if I can convey some of the experience through my writing, in a way that inspires, enthuses and encourages people to explore more of our native seafood then it’s a fitting conclusion. 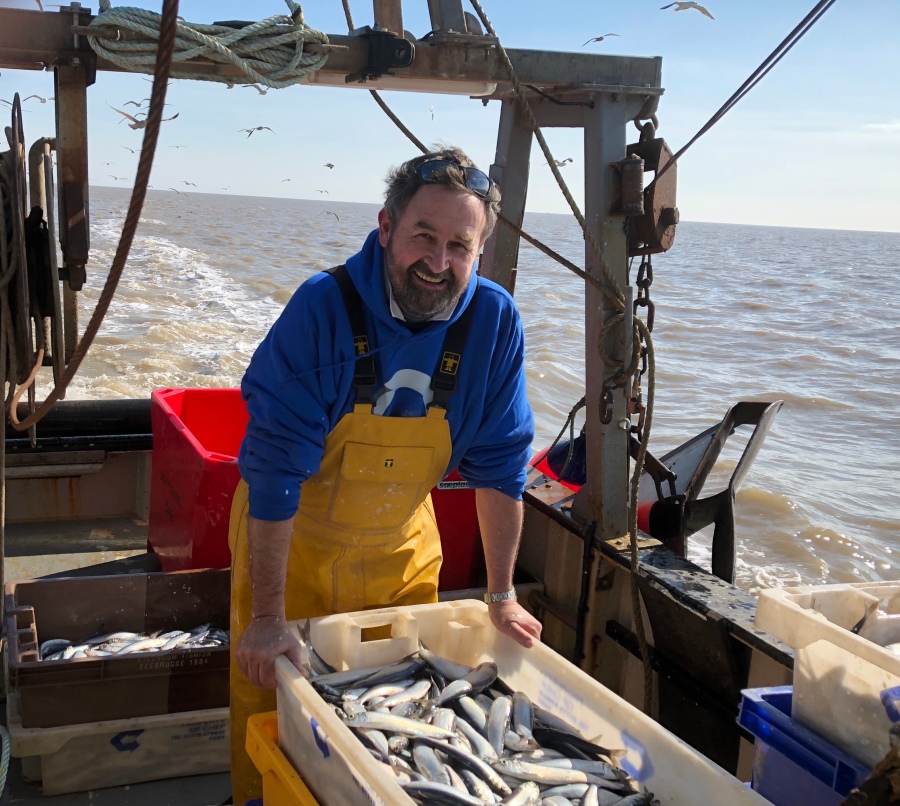 Having visited West Sweden (Bohuslän), I can vouch for the fact that the Swedes (and most Scandies for that matter) simply adore their herring. Many communities on the coasts of Götaland and Västergötland were founded on the strength of the herring fishery there, a century ago, during the ‘Great Herring Period’ when many fortunes were made.

Eating herring is very deeply engrained in their food culture and I think we have a lot to learn on how to get the best from this abundant and delicious source of protein.

This is a fantastic way of showcasing it really simply, using herring fillets and then eaten with buttered ryebread, or boiled potatoes, fresh chopped dill and capers. The whole process too, is incredibly satisfying.

Method
Heat about 1 litre of the water, enough to dissolve the salt. Let the brine then  cool to room temperature. Next submerge the herring fillets in the brine and refrigerate overnight, or up to 24 hours.
Bring the sugar, vinegar, the remaining water and all the spices to a boil. Simmer for 5 minutes, then remove from the heat and let steep until cool.
When the herring have brined, layer them in a glass jar with the sliced lemon and red onion. Pour over the cooled, spiced pickling liquid and seal the jars. Wait at least a day before eating (if you can). The pickled herring will then keep in the fridge for up to 1 month. 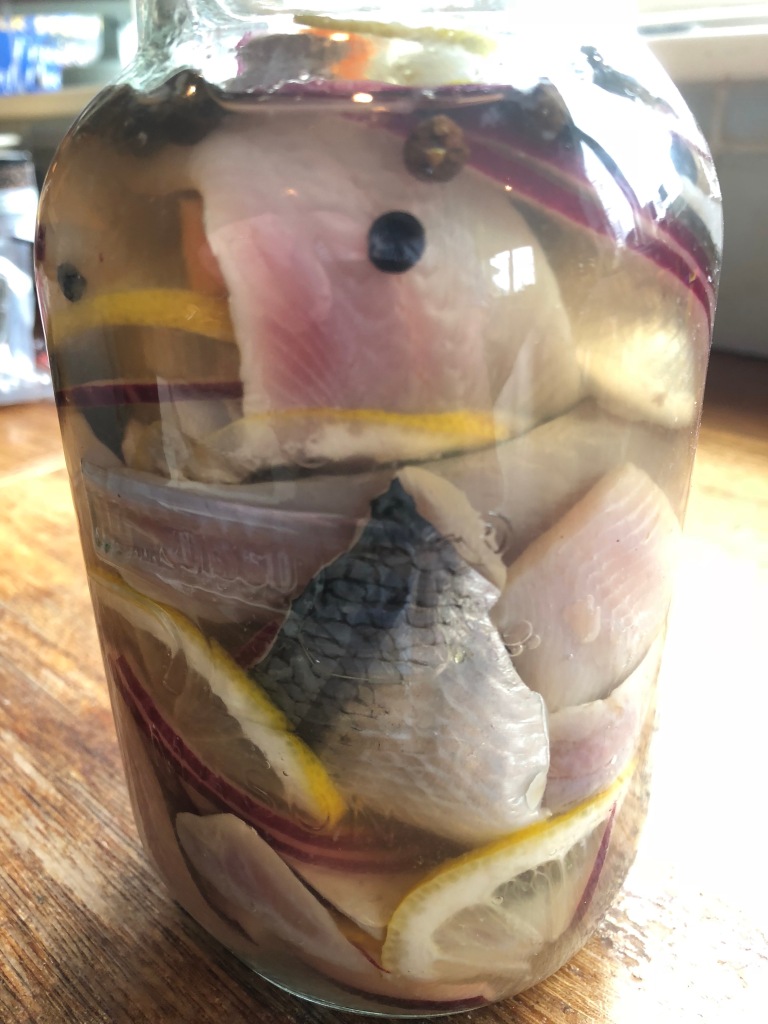 3 thoughts on “The Fish that made History”