As many of my followers will be aware, oysters do it for me. Big time. I’ve not yet posted about the hedonistic hit that a dozen Carlingfords will dish out, but an invitation last week to sample some of our finest and most flavoursome native fish, whilst bearing witness to the crossing of embattled shucking knives at the outrageously indulgent TABASCO® British Oyster Opening Championship, was just too much of a gift horse.

So to Brewer Street, Soho, I made haste and notably to Mark Hix’s altar of seafood where the lines would be drawn. Here under the most stringent of conditions, fourteen accomplished “shuckers ” would be thrashing it out, all competing for the prestige and kudos that befits this kind of shellfish mastery. A trophy too for the victor and a cash prize, all the incentive needed to pry open, seamlessly and professionally, 30 native Rossmore oysters in the least time possible, with presentation and speed amassing precious points, with contamination and carelessness heavily penalised by the eagle-eyed judges, who out of sight of the fray, would blindly score the finished gems.

Hosted by the inimitable Brian Turner CBE, this competition attracts those who have perfected the art of oyster opening to a deft and accomplished form. Turner is no stranger to this competition, having presided over the doings for 8 of its 24 year history. A lover of oysters himself, he tells me that he particularly delights in the Porthilly, grown in the nutrient-rich waters of the Cornwall’s Camel Estuary and it’s clear he’s very at home in this particular role. 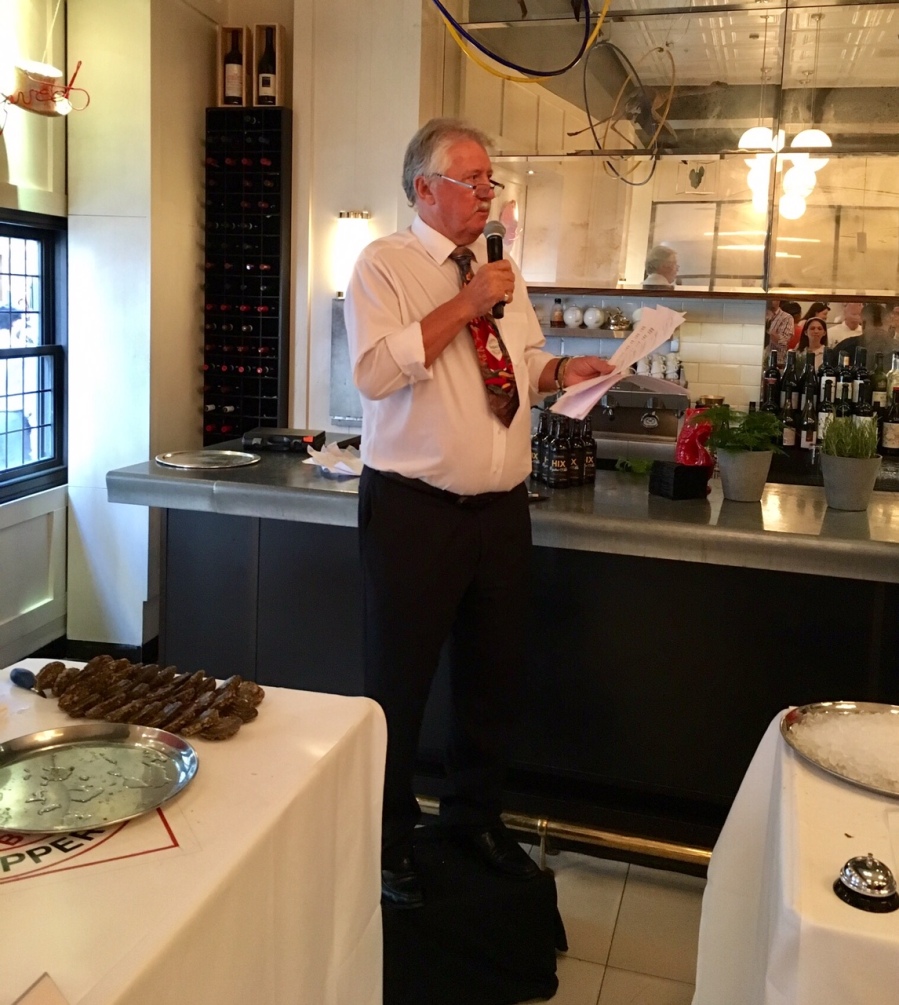 As the restaurant fills with expectant spectators, guests and supporters, the atmosphere builds, the apprehension and excitement palpably etched on the competitors’ faces. I ask Fredrik Lindfors of the Fish Shop in Notting Hill, (last years’s champ) to explain just what’s involved.

“We have to concentrate on quality ” he advises, already steeled to the task. “We must shuck, turn and present 30 oysters as quickly and efficiently as possible.”

No contamination with either shell or blood and no damage to the meat are the criteria lest penalties are incurred and I learn that scoring a time of under 4 minutes is a good round for a professional oystermeister.

“My best time was 2 mins 52 seconds in Gothenburg” asserts Lindfors, clearly focused and prepared in an almost Zen-like state. “Although they weren’t turned”.

The excitement and awe of the occasion are certainly not lost on Wilton’s Filippo Salamone who returns for his 5th competition, having been opening oysters virtually every day for the past 11 years.

“I delight in the oyster” he beams. “The sheer joy of their opening brings my senses alive. The zing of the saltwater and the tang of the ozone makes me want to swim in them!”

Unlike Lindfors, he loves an oyster, preferring them quaffed simply, with lemon and black pepper, relishing in the unique and intense performance of the native, which he admits to finding far more alluring than your average Pacific Rock.

Suddenly, it’s time and the first batch of shuckers take their places at the tables, methodically arranging their oysters for the off. With knives poised, MC Turner rallies the ensemble, their supporters crowding round. Rules firmly explained, the first round gets underway with tongue-biting concentration etched on contorted faces, as blades are plunged twixt hinges with time keepers poised.

As the first competitor to shuck their final fish, completes the round, the triumphant palming of a bell heralds their success. All remains now, is for the sage and specialist judges in the form of Chris Leftwich, David Jarrad and Mike Berthet (out of sight downstairs) to peruse each dressed-out stack of natives for technical flaws: unsevered, not properly turned, shell on the flesh and woe betide, a sanguine trace, accruing a time penalty of 30 agonising seconds to the scoresheet.

I spy Suffolk oyster farmer and fishermen Bill Pinney amongst the waiting hopefuls, aproned and pensive. It’s the second time he’s competed in eight years and although a mine of seafood wisdom and piscatorial experience, he looks on in awe at the alacrity of the younger generation, as the oysters pile up in seconds. He’s due on in the third round and I promise to cheer heartily.

The competition continues apace with support from the crowd in spades. One by one the shuckers prove their worth in a craft that obviously takes many hours of dedication to hone. Most of the top London oyster houses are represented here, with Scotts, Wright Bros, and HIX all vying for acclaim. 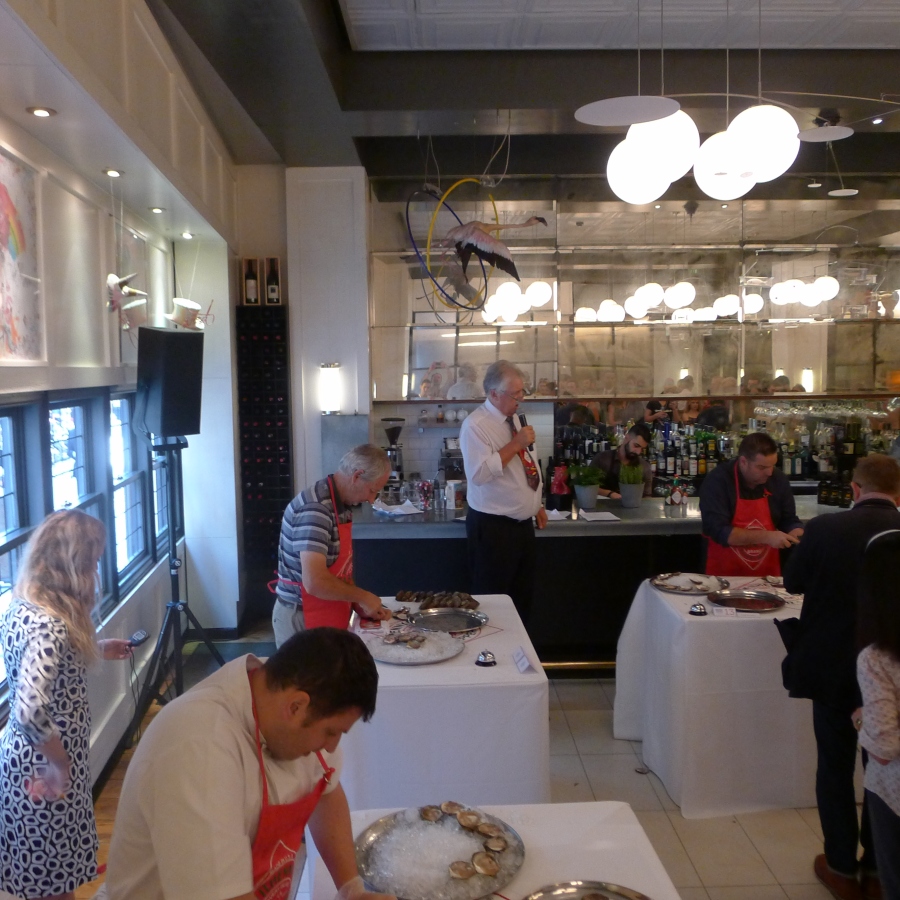 In between bouts, I’m treated to an exhibition of how to prepare native oysters by Rossmore’s own aficionado, Neil Reader, who with uncompromising flair, instantaneously  produces a plate for my own delectation. Unashamedly, I knock back a half dozen, the initial saline rush backed up by the most incredible sweetness. Massively flavoursome and now just in-season (from September 1st), these Scottish treasures from Loch Ryan are sustainably harvested by their own boats as the water cools into the autumn, and distributed throughout the UK.

With stopwatches synchronised for the final round, the pressure resumes with the last four contestants engaged in a study of concentration. The clamour rises as each bell signifies another 30 opened, accompanied by sighs of relief as backs are stretched and the sparkling plates are whisked off to be duly assessed.

A somewhat exasperated Chris Watts from Balthazar, explains to me that 3 of his oysters had cracked shells.

“It makes it harder,” he confides. “The softer shell of the native, means a crack can result in difficulty opening, sometimes producing splinters.” Extra time taken too to ensure points aren’t added unnecessarily. “You always hope that they’ve identified any cracked ones before they give them to us “, he adds, “but quite often they’re tricky to spot”.

Judging over, we chat whilst the scores are tallied and to my obvious delight, the plates of oysters reappear for us to consume at will. Some 420 in all and utter heaven for a serious seafoodie. Brian Turner calls us all to order and everyone gathers for the announcing of the results and who out of the 13 will be crowned victor, coveting not only the trophy but a place at the World Oyster Opening Championships to be held in Co Galway at the eponymous Seafood Festival on September 24th.

A hush descends as the scores are revealed. It’s tight. Joint 3rd come Katalin Juhasz (Wright Bros Borough) and Michael Heins (Scott’s) on a hugely respectable 4 mins 28 secs. Nudging ahead of them by a crucial 16 seconds is the ebullient Filippo Salmone (Wiltons) on 4:10, but cruising to successive titles is the masterful and unassuming Fredrik Lindfors (The Fish Shop) who knocks spots of his nearest rival in an incredible championship-winning time of 3 mins and 10 seconds to rightfully claim the honours.

Clearly delighted to have won, Lindfors admits that the competition was tough. Head Judge Chris Leftwich, recently retired Chief Inspector of the Fishmongers Company declares, “The calibre of talent was really impressive, in a strong field of competitors. Fredrik not only achieved the fastest time but also an outstanding presentation.”

I’m impressed too. It takes skill and confidence to open oysters ordinarily, as my own rather lame and occasionally fraught efforts have proved. However to be able to replicate the action time after time and under duress in the charged atmosphere of the championships, takes a rather special kind of gift

Bravo to Fredric and indeed to all. I shall look at an oyster slightly differently and with perhaps a little more reverence from now on and selfishly hope for another invitation next year. 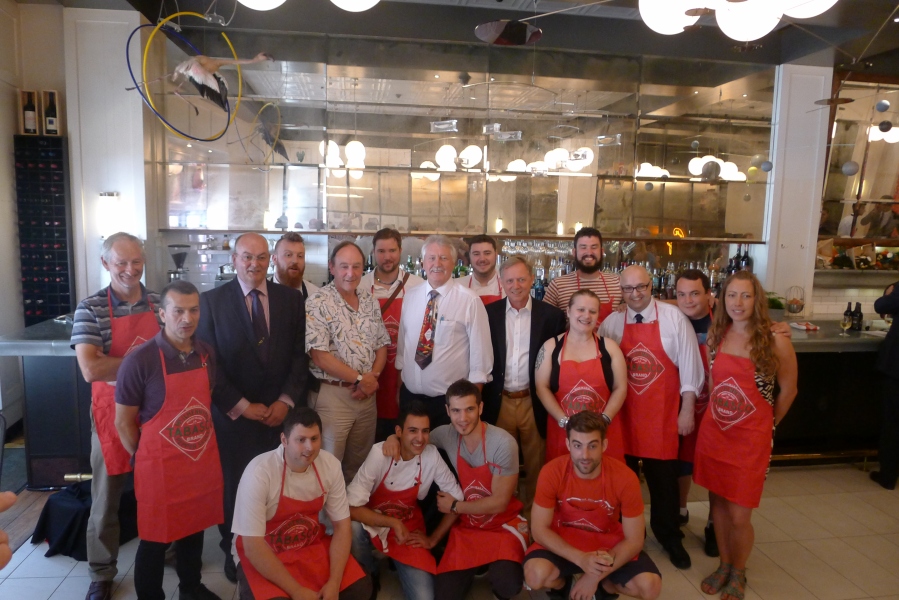