As big band leader and Cockney icon, Billy Cotton exclaimed, in his piscatorial parody, “The Whelk Song” known and loved by the thousands of listeners who tuned in to his regular Sunday lunchtime “Band Show” through the 1950’s and 60’s on the BBC Light Programme.

Having grown up in 1970’s seaside Suffolk, my experience of whelks (Buccinum undatum) was solely confined to using them as bait for cod, skewering them on the shanks of countless longline hooks ready for deployment on the inshore grounds off the coast of Felixstowe and Orford, which at that time, yielded a ready and abundantly seasonal supply of quota-less cod, skate, and whiting, the cod being our absolute prize, with specimens caught regularly up to 20lb. 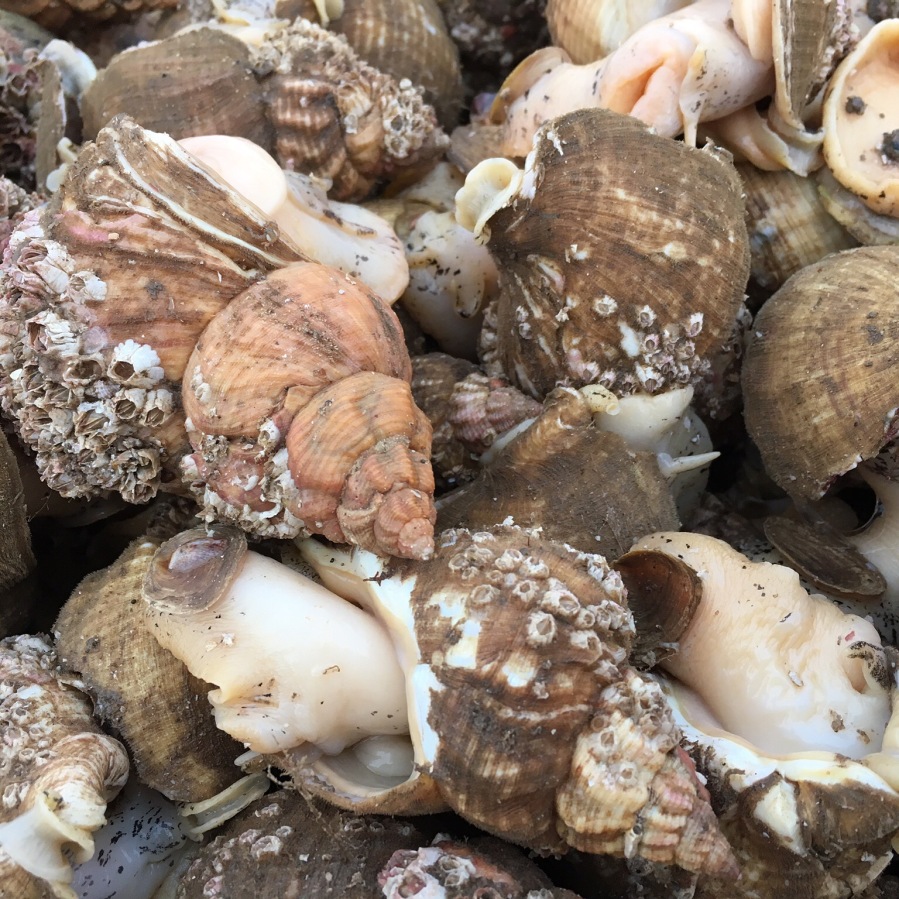 Unlike today’s artisan inshore fishers, who predominantly bait with imported squid, in those days whelks were the cod’s plat du jour and were good at staying on the hook, allowing the longliners to shoot their gear one day and haul the next, with maximum fishing time ensured.

Although traditionally a popular, boiled seafood snack in London and countless south and east coast seaside venues, where eaten with the obligatory lashings of white pepper and vinegar, the lowly whelk  has long avoided the menus of more eclectic establishments and never really enjoyed the popularity of its cousins of the bivalve world such as the cockle, clam and mussel. 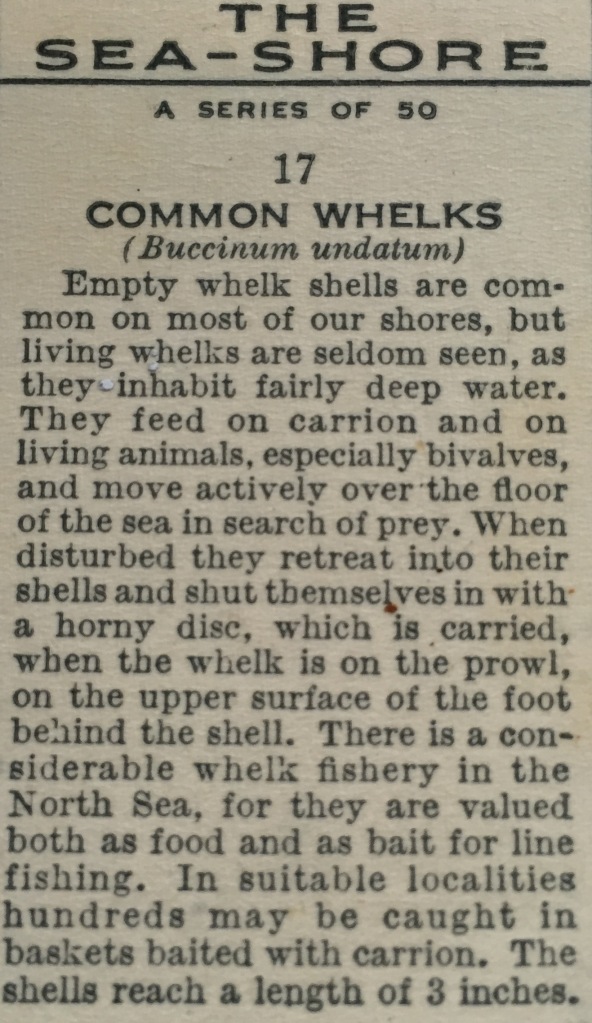 Back then we ate them seldomly. My fisherman mentor and inspiration, Dougie Goodall, did sell a few live, (he strangely refused to cook shellfish he caught) from his hut on the promenade on Felixstowe seafront, and occasionally at market, in a measurement known onomatopoeically as a “wash.” As far as I recall, it was really only the Chinese restaurant in the high street, that ever bought them in any quantity, the rest being reserved for baiting his lines.

I enjoyed catching them though, and hauling the whelk pots, prior to shooting the freshly baited gear and then re-hauling the miles of longline which had fished the previous 24hrs, was a boyhood delight. Traditional inkwell-type whelk pots made of heavily Stockholm-tarred rope fixed to a heavy metal base-plate were fished in “shanks” or “fleets” of up to 20+ with a flagged marker buoy or “dahn” either end. Cod frames were the bait and my job was to sort through the whelks, discarding the residual benthic flora and fauna and if I intended going to sea myself the next day, on my own little foray, then I was allowed to reserve the by-caught hermit crabs for bait (equally delicious to starving cod) as my perk of the job. 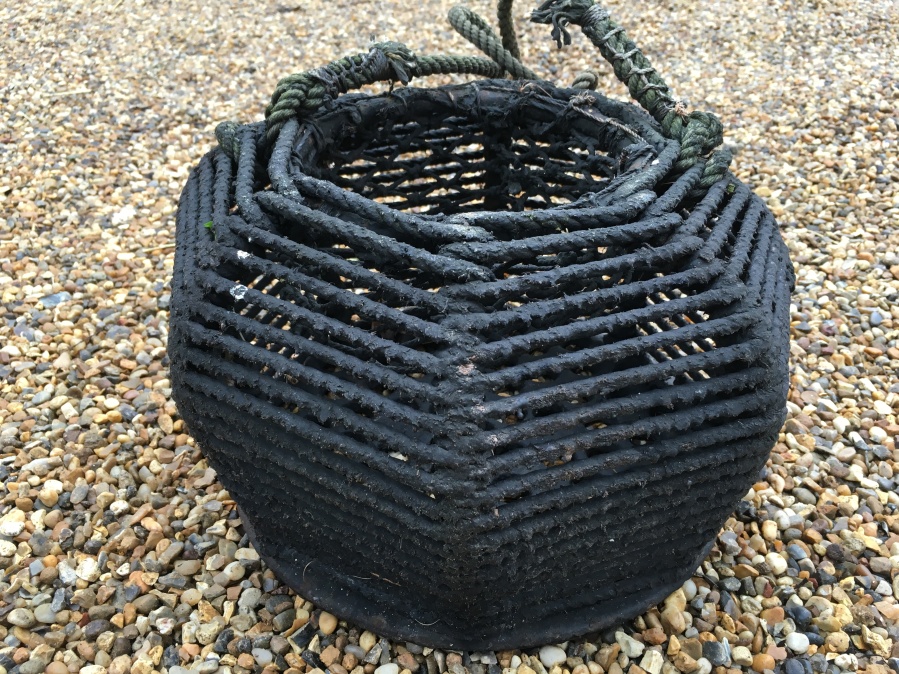 As the years have passed, I’ve heard little about the whelk. A poor cousin in the scheme of celebrity-driven seafood, they quite often appear as a garnish in a Fruits de Mer on the odd occasion, but I confess, they seem to allude as a main event.

But having said that, they’re still very much in vogue as a commercial catch and indeed caught by many day-boats and larger vessels around the UK. Their landings, annually boasting a substantial volume of around 10,000 tonnes, are not subject to an EU-enforced Total Allowable Catch (TAC) like so many other commercial species and are primarily destined for Asian and Mediterranean markets, their value increased by the perception of their “exotic” nature in those countries, who import them by the thousands of tonnes.

By chance recently, on a trip to Lowestoft Fish Market, I struck lucky, by coinciding my visit with the arrival to port of the Brixham vivier crabber “Ebonnie” BM176, managing her seasonal changeover from crabbing, off the Dutch and Danish coasts, to whelking on the numerous banks that lie about 40 miles to the South East of Lowestoft.

Owned and operated by Brown and Bright Shellfish, this vessel is the older twin of “La Creole II” BM177 a brand new and recent addition to the fleet. Boasting a fishing capacity of 1600 modern polythene pots “Ebonnie” will shoot strings of 100, hauling them once a day and moving steadily across the ground, shifting the effort onto new patches, where the whelk population aggregates.

“This allows the ground to recover and be repopulated,” affirms her Skipper, Matt Harding, a Brixham lad and experienced crabber and whelker. “There’s absolutely no point in continuing fishing the same area if the whelks suddenly disappear. We move them (the pots) systematically across the grounds to maximise the effort.” Being carnivorous feeders, baiting with dead crab and dogfish, I learn, provides the ideal combination to tempt the whelks from their sandy lair.

The daily routine involves shooting, hauling and grading the whelks over a stainless steel riddle, then bagging, weighing, rebaiting and reshooting the ten strings which lie fishing in relatively little depth of water, 4-5 hours steam from the port. With a normal trip extending to about three days, the work can be hard, but undoubtedly rewarding, when the whelks are feeding, which I learn is not always the case.

“Tide and weather are strong influences on how the grounds fish,” states the skipper. “Whelks are sensitive to tide and we try to avoid the Springs, as they bury themselves in the silt and won’t feed.” I ask whether the recent run of winter storms have had any effect on the fishing, but after a successful couple of trips, it’s obvious that the whelks are both there in number and filling the pots to order.

Back on the Fish Quay later the next week, I observe the landing process, the bags of washed and graded whelks being swung ashore metronomically on the boat’s davits, stacked on pallets and tugged by hand truck to the awaiting transport.

But what of the catch thence landed at Lowestoft Fish Quay and its onward journey. Where do these benthic sea snails actually complete their pot-to-plate cycle? For the rest of the story I turned to the buyer and processor of the catch, Macduff Shellfish, the biggest player on the European wild shellfish scene and processor and purveyor of quality whelk, scallop, crab and langoustine from all around the inshore waters of the British Isles. Provenance is key with Macduff and all whelks, although an EU non-quota species, procured from UK fishermen, are sourced from species that are abundant and fished both sustainably and responsibly using low-impact methods that sit easy with the environment, ensuring viable fisheries for the future.

Questioning Roy Cunningham, their Vice-President, at the firm’s HQ, I discover that a 4-hour steam from the inshore Suffolk grounds, is the shortest element of the voyage. Macduff is a global business with an impressive 130 year history with the export market being its prime outlet and these fish I learn, have far to go.

As mentioned earlier, whelks feature hugely in both Mediterranean and Oriental cuisine, the texture and consistency of their meat being highly regarded as a worthy substitute for the warmer water conch species, now deemed much rarer and more expensive, having been subject to overfishing in certain parts of the Far East. Both Japanese and Korean chefs prize them highly, preparing them in a variety of ways that befit the local cuisine in countries where seafood is more a staple than a sundry.

Once landed and loaded directly into Macduff’s own refrigerated transport, they then journey on, stopping at various collection points at fisheries around the UK coastline until they arrive at their terminus at Mintlaw, just inland from the UK’s premier fishing port at Peterhead on the Scottish Buchan coast. Here in the state-of-the-art factory, the molluscs are cleaned and cooked en-masse in a pressurised steam cooker. Having then been mechanically shucked, the meat is further inspected by hand to further ensure quality before packing and freezing.

So from a humble start on the inshore sandbanks of Suffolk’s coastal waters, these bivalves are transported on a value-adding trip to all corners of the globe, to consumers whose demand for this locally insignificant and prolific denizen of our seas, is such, that a vibrant and sustainable market continues to grow and thrive.

But is there still a home-grown desire for this beautifully-shelled dweller of the shallows though? Do the seaside strollers of our resorts still pick at a pot, all drenched in vinegar and dusted with white pepper? A quick call to my friends at Mick’s Eel Supply on Billingsgate Market in London’s East End, affirms that is still definitely the case, with a tonne a week being cooked and shucked, all by hand, for the seemingly ever-popular (and incredibly British) shellfish emporia and stalls that identify our seafronts and markets from Bridlington to Blackpool. 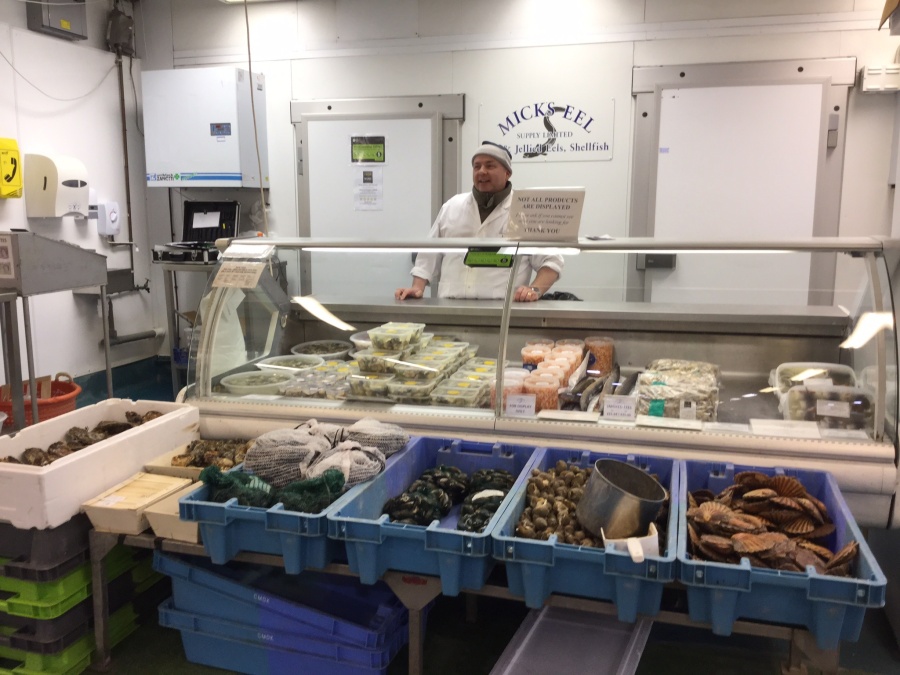 Popular too and understandably, amongst the Chinese, and other Far Eastern communities of the capital, where the larger specimens, I learn, are the preferred offering, ending up stir fried or sashimied along with squid, crab and prawns in countless and exotic recipes of the Orient. Tales of aphrodisiac qualities also abound, making the whelk an inexpensive contender for the Valentine oyster!

Acclaimed chef, restaurateur and seafood guru, Mitch Tonks, agrees though, that in the UK we’ve generally lost the appetite for them, compared to our nearest European neighbours and cites France as one of his favourite places to enjoy a feast of whelks.

“Just look at a French Assiette de la Mer and there you’ll find the sweetest tasting little whelks, with a tang of saline and they’re as good as you’ll get. We’ve pretty much forgotten how to eat them here, but the French fishmongers know how to select the quality specimens and you’ll find them on most markets.”

So how would a 21st century seafoodie go about enjoying a couple of dozen, freshly cooked whelks? Well taking into account that essentially they are L’Escargots de Mer, I think the best way to sample their texture and flavour is to sauté in an intensely garlicky beurre noisette. The resultant dish constitutes an extremely good entrée and suffice to say, apart from being a little “chewy” they’ve gone down here extremely well, especially for the members of my family who have over the years developed a penchant for snails.

In the meanwhile though, (and once the weather finally abates) I quite fancy making my way to the mooring, baiting my own two traditional pots and heading out to sea.

NB This article was also published in the March 2016 edition of The Skipper magazine (www.maramedia.ie)

Member of The Guild of Food Writers