When Guy Dorrell made contact with me and suggested we met over a pint to discuss his Community Supported Fishery in Wandsworth, SW18, I couldn’t help but conjure up an image of a few brightly painted day boats tied up on a sparkling Thames by Wandsworth Bridge, unloading their gleaming catch amidst a cloud of creaking and wheeling gulls.

Cast your minds back to 2012 and to a BBC production entitled “The Fisherman’s Apprentice” where ex-Royal Marine and marine biologist Monty Halls embarked on an eight month stint, learning the artisanal trade of inshore fishing at Cadgwith Cove, under the mentoring eye of local Under 10 Lobsterman Nigel Legge (legend).

In the final episode of that riveting and (especially for me) nostalgic look at the craft of inshore cove fishers, Monty took the concept he’d discovered in America, of getting local residents, hitherto unaware of the provenance on their doorstep, to buy into a monthly Fish Box scheme.The principle here, was to encourage local folk within the hinterland of the fishing community, to pay up front for a monthly selection of local fish which would not only be good value, but allow them to experience an unrealised freshness and diversity of product, whilst affording the fishermen a worthy premium on a percentage of their catch.

I freely admit, I enjoyed every aspect of that series and obviously so did Guy and his partner Ilona, in their case the impact being so great, that with consummate inspiration they undertook to replicate the Cornish model in the leafy suburbs of Wandsworth Town.

We meet in their flat and from the outset, Guy makes no bones about the fact that after many years in a career that encompassed banking, media and recycling, this is an entirely new project. Born out of a desire to start a business that used the precepts of innovation, sustainability and fairness at its heart, the concept is to bring fish that are all but a few hours landed, straight from the boat to a community who would otherwise be virtually dependent, on supermarket-bought or processed products.

Having seen similar schemes started and having charted their progress, Guy and Ilona were confident that their model was not only sustainable, but also had the ability to grow organically in a measured way, that would benefit them, their customers and their suppliers (the fishermen). The founding principles underpinning the model being, that seafood of the utmost freshness and quality is made available to people who are able to trace the provenance back to the boat and skipper who caught it.This in turn provides an opportunity for the fisherman to realise proportionate value whilst developing a relationship with the end-user which, hopefully, will lead to a higher degree of marine stewardship and customer understanding. 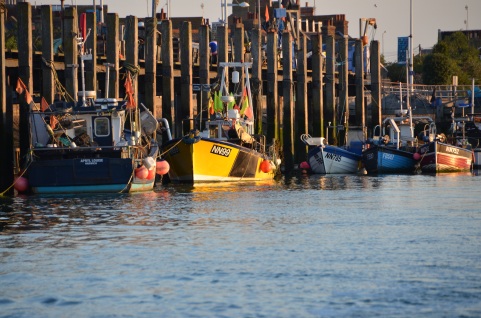 Albeit, when we meet, the business is only literally weeks old, it’s obvious that already it has attracted much attention.

Through the power of all social media forms available to them, the couple have marketed their scheme locally and also developed this superb infographic, (having taken advice from different and prominent national seafood organisations), which portrays a very telling and all too familiar story in a stark and hard-hitting diagrammatic form:

They and others have been appalled that the journey from boat to plate, via some supermarkets, often involves a chain of many and protracted steps. This has led in some cases to fish being “on ice” for up to a fortnight and thereby ensuring that quality is well and truly compromised. Not good for producer or consumer.

Armed with this message, they have been able, already, in the few short weeks of their existence to provide a service to local residents under the following terms.

Subscribers are invited to sign up to an 8 week Faircatch membership or “season” where fish packages, ranging from 0.75kg- 2.25kg, are collected from a central point (The Barmouth Kitchen). Then comes a commitment with a one-off payment starting at £50 with customers deciding whether they wish to collect weekly or fortnightly. Once signed up, members have to be prepared to accept what’s been caught by the boats that day (there isn’t the opportunity to order select species) and they then proceed to collect and enjoy their investment whilst appreciating the many dietary benefits and learning about sustainable low-impact and seasonal fisheries into the bargain.

“Some people are a bit reluctant to cook whole fish, rather than fillets” Guy explains, “so one of our challenges has been to encourage our customers to learn how to fillet for themselves. We’ve taught ourselves in a couple of months, with the help of YouTube and it’s really apparent that many of our members are doing the same. We also plan to run a series of workshops in fish preparation over the coming months, with an industry professional doing the demo’s, teaching and helping everyone to improve their knife skills, it’s really not as hard as you might think”

So where to source? What to source? It’s instantly apparent to me that both Guy and Ilona have invested a colossal amount of time and energy into talking to fishermen, fishing organisations and taking the time to secure a continuity of supply, that is feasible.

The Channel Harbours of the South Coast at Hastings, Newhaven and Emsworth feature mainly, as sources of prime day boat species that can be accessed reasonably quickly. Hastings in particular carries the prestigious and much esteemed MSC certification for its Dover Sole and Herring fisheries. This means, in short, that the fish caught must be at sustainable levels and the fishery effectively managed using non-damaging low impact methods.

“Ideally”, he continues, “we need to source from an inshore fleet that’s no more than 2 hours from London, so we can genuinely say it’s been locally caught with food miles being kept to a minimum. Some of the fish caught on the Sussex coast will actually end up in the West Country markets of Brixham and Newlyn, only then to return to London, ” a practice that strikes Guy and Ilona as a bit “nuts”. In addition the pair are forging links with fishermen on the North Kent and Essex coasts in the hope that when the weather keeps the fishermen from one region ashore, others will be able put to sea.

“Our fishermen take massive pride in what they do” waxes Guy, “They like to see an appreciation of what can be lonely, tiresome, gruelling and very often dangerous work. Why shouldn’t they be fairly rewarded?”

I can see from Guy’s knowledge and his affinity for the workings of a commercial fishery that he has already developed strong relationships with the fishermen (and women) that he deals with.

“We will often speak to our skippers, whilst they are at sea to find out what they are catching, so we can place our order. As well as the familiar species such as Cod, Plaice and Dover Sole we are trying to encourage people to eat a wider range of species, which they previously, may not have been aware of, like Whiting, Pollack, Dabs, Skate, Flounder and Huss, this takes the pressure off the more commonly consumed species and helps with the management of stocks.” 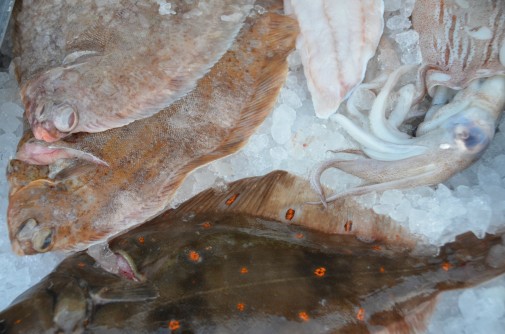 “More than 90% of all the Seafood eaten in the UK is made up of 5 species (Cod, Haddock, Salmon Tuna & Prawns)” continues Guy, “so, it’s a considerable challenge, but an incredibly worthwhile one. Sometimes, we will actually be down on the quay when the boats come in and we often help them unload. If timings make that difficult to achieve, we’re lucky that we have access to their cold stores where the catch will be left for us to collect.”

Guy and Ilona are very proud of the fact that only recently they broke their own record for freshness, collecting fish off the boat at midday and then delivering into the hands of their members only 3 hours later

“It literally only had to travel an hour up the A3″, adds Guy, ” so we even had time to buy our fisher couple at Emsworth (Pete and Chantelle) a quick pint to say thank you” 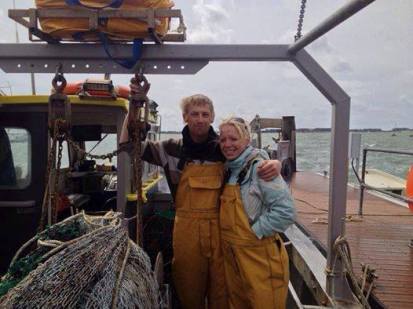 Once sorted, weighed out and returned to ice, the catch is transported back to Wandsworth in Guy’s commercial grade insulated boxes, ready for customer collections on a Friday between 3.30pm and  6.30pm. At The Barmouth Kitchen Guy, Ilona and their children (Lila, 2 and Audrey 8 months) then greet the customers as they arrive to collect. At this point they are able to engage fully with them, answering questions ranging from the type of fish and how its caught, to preparation guidelines and cooking hints and tips.

Ilona explains: “Skinning a Skate wing is really quite fiddly and they can be very rough and thorny. We’ve discovered that a quick roast in the oven leaves them in a perfect condition for the skin to peel off really easily. It’s little cheats like that, that will only encourage people and help them feel less daunted.”

Guy elaborates. ” We’re providing a completely different experience  to buying fish at a supermarket counter, the main feature being that the customer can trace their fish straight back to the skipper and the boat that caught it and exactly how and when it was landed. More broadly, it’s about providing a real connection between urban consumers and small-scale fishermen, a personal story to accompany their food, as opposed to a faceless commodity, and we are finding that people are becoming increasingly receptive to this.”

It’s clear to me by now, that here is a man who wishes to create a hugely positive story around food that is all too often only perceived as a processed product, with very little thought given to the management of its production or the environmental implications on the source of its origin. I ask Guy and Ilona what the future holds for them and Faircatch; where would they like to be with the scheme in a year’s time?

“Numbers-wise it’s hard to say” he observes, “but I’d like to think that this time next year were looking at 150+ subscribers, with perhaps a bicycle distribution/delivery system available for the local neighbourhood alongside the collection point(s).”

I leave Guy and Ilona with a real sense of feel-good, old-fashioned entrepreneurship, but superimposed with a doctrine that is very much 21st century and brings together the commercial realities of an industry, with a growing desire for fresh, locally sourced food that is not only affordable, but eminently sustainable and naturally delicious!