By my reckoning, it’s 34 years since I last crunched my way down the little shingle beach, beyond the boatyard at Felixstowe Ferry, in my trusty “Bullseye” thigh boots and clambered aboard the dinghy which was tender to Dougie Goodall’s fishing boat “Swallow II”. Little did I realise, as we rowed to the mooring, that this glorious, early summer’s morning back in 1982, would be my last trip made for many, many, years. The closing scene of a boyhood that had borne witness to the travails of our local inshore fishermen and that had come to forge and represent the passion for the industry and its participants, that I now feel so keenly.

During the summers I spent potting for crab and lobster and the winters longlining for cod and skate, I would willingly while away the precious hours of my holidays and weekends at sea in an open clinker-built motorboat, with no VHF, no life jacket, EPIRB, GPS, mobile phone, or indeed quota, meaning we fished for what we wanted where we wanted. For me, a perfectly idyllic (albeit often impoverished) existence that only the demise of my school days marked the end of, having instilled an innate love of seafood in me and moreover, a profound and deep-seated respect for those who endure not only the daily vagaries of weather, tide and season, but also the complex and often errant doings of the Common Fisheries Policy, etched out by officialdom with rigorous and determined enforcement.

But I’m here again, oilskin-donned and with the biggest of grins across my face as I’m rowed to the Valerie Ann (IH322) at the invitation of Under 10m skipper Ed Butters, to steam once more from this diminutive but much-loved, weatherboarded and weatherbeaten gem of Suffolk’s heritage coast, on the hunt for the first of the new season’s lobsters.

A southerly and sometimes overlooked cousin to the much vaunted holiday destinations of Aldeburgh and Southwold, Felixstowe Ferry with its rich maritime history, exudes an eclectic and individual charm that beckons thousands of visitors in a year-round pilgrimage from both sea and land. Situated two miles North of its expansive and dominating commercial neighbour, the Port of Felixstowe, that currently boasts one of the largest container terminals in the world, its underlying allure, undoubtedly stems from its timeless and unadulterated simplicity and the fact that development over the years has been tempered. An individual and indeed very autonomous community exists here with the inhabitants benefiting from a church, (St Nicholas) a pub (The Ferry Boat) and two cafés.

John White, fisherman, boat-builder and now Harbourmaster tells me exactly what 70 years as a Ferry resident and fisherman has meant to him and how times have changed. “My parents moved here after the war when my father left the Merchant Navy,” he recalls. “He started fishing here and I’ve always been part of that scene”

A mainstay of the community, the fishing fleet back then, numbered many more skippers and crew, but still a significant number operate from the mouth of the Deben today, with currently nine full-time registered craft. “Of course”, continues John, “nowadays we actually have more boats fishing out of here commercially than Lowestoft.” A galling fact, when you consider the historical status and importance of the East coast’s most famous trademark, but now erstwhile fishing port.
Yachting and the services it demands, plays an increasingly important part too in the economy here. Visiting UK sailors and from nearby Belgium (only 80 miles), Holland and France, drop in regularly for supplies and fuel or just to appreciate the stunning scenery of the surrounding Suffolk coastline and countryside with views up river to further moorings at Ramsholt, Waldringfield and Woodbridge. Centrepiece is the well-known and much photographed jetty, where the Ferry has run for generations, latterly skippered by John and before that, his father in law and well-respected local figure Charlie Brinkley, providing travellers with a crucial, time-saving crossing to Bawdsey on the northerly bank and still hugely popular with walkers and cyclists.

“We get hundreds of vessels visit over the course of a year” enthuses John. Being Harbourmaster he also acts as a pilot for those visitors requiring assistance in bringing their vessels safely into the Deben. Facilities abound here too, for boating enthusiasts under either motor or sail. The sailing club is well established with a thriving membership and the Ferry Boatyard affords repairs, haul-outs, chandlery and moorings, as well as still building a number of boats from basic shell-like dinghies to the beautiful lines of modern 26ft fishing boats, one of which currently resides in the workshop, for completion this year and destined to remain fishing here, carrying on a worthy tradition of manufacturing quality sea boats, of which Andrew Moore and his team at the Felixstowe Ferry yard are justifiably proud. 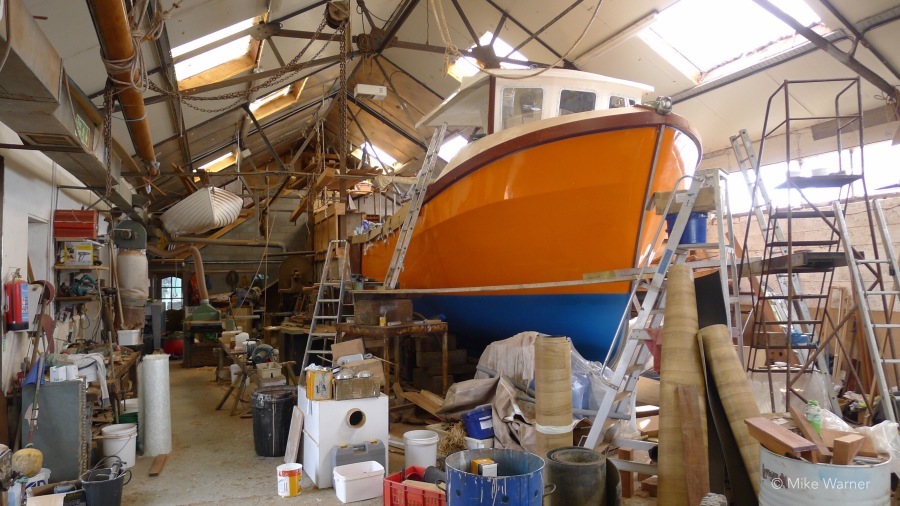 As we leave the mooring and motor steadily against the young flood tide out to the lobster grounds, where Ed’s pots lie fishing, I notice the shingle bars and spits that mark the river entrance have shifted considerably since my days afloat here. Ed points out the depth of water we have to negotiate, on the sounder and indicates the position of the channel buoys which John monitors constantly to ensure they always mark the most safely navigable route.
“At High Water we can still nip over the bar with our draft,” Ed explains, “but you don’t want to be caught short coming home with a boat full of fish and not much freeboard, so it pays to be careful.” 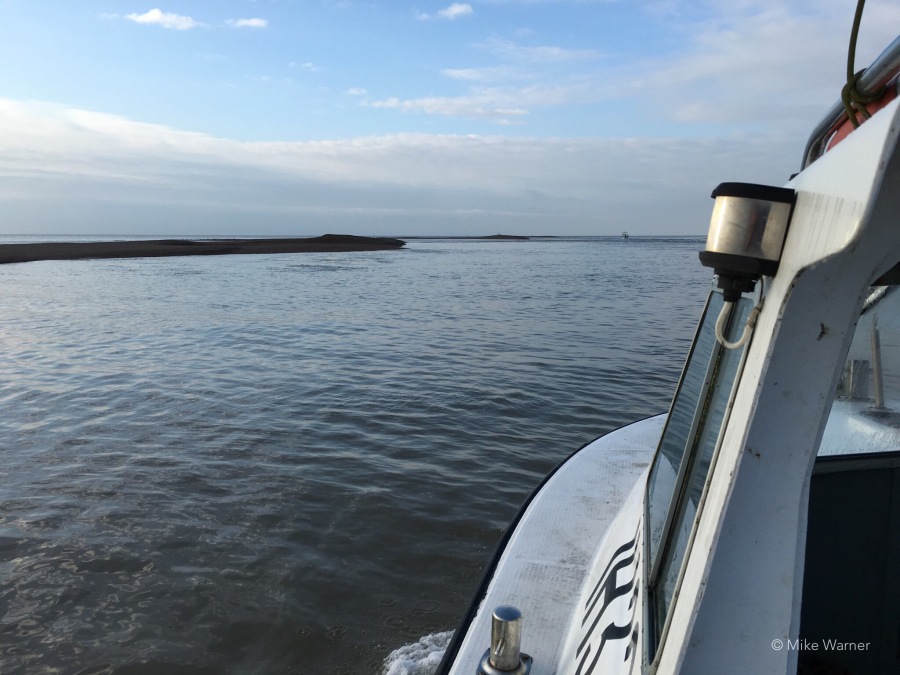 Earlier, John reminded me that in summer, the submerged shingle bar with its confused waters, harbours schools of wily bass, eager to swallow tempting lures, although now recreationally restricted since the enforcement of their new catch regulations in January.

Steaming now into the northerly inshore sea area, locally known as East Lane, the familiar landmark of Bawdsey Manor looms up to port, it’s turrets and wings once playing host to the team headed by Robert Watson-Watt and his critical wartime invention of radar, which seems oddly symbolic as we cruise past, toward the first dahn (marker buoy). 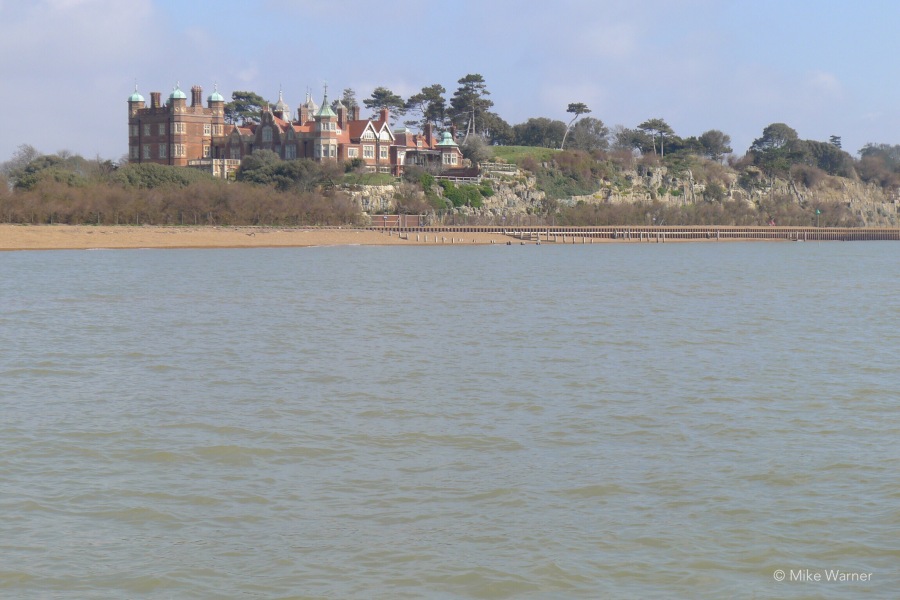 With lobsters our main quarry, Ed is anxious to know what his pots might yield, having not hauled since Easter – a constant blow keeping him ashore since then. “We may find some of them have moved” he tuts. “I shoot them in lines and each end pot is a heavier one to act as a marker.” The dahns hove into view and I’m reminded that with a strong tide running now, quite often the gear will “run under” only popping back into sight as it slackens towards High Water.
Lobsters have been plentiful, in recent years, although not in such numbers as John White and his father saw immediately after World War II, when a lack of fishing meant massive recruitment and low mortality for that species. Now the pressure is back on though, as restricted areas for the nearby wind farm developments and associated cabling work, have meant that fishermen have been forced into ever decreasing spots, with individual gear often shot in close proximity on the more productive patches. As Ed hauls the first pot, I’m told that at present the gear is being fished as “singles” whereas later in the season with more fish on the ground then they’re made up into “shanks” and fished eight pots in line, as a string.

Nothing on the first haul but the second pot yields a keeper, just exceeding the gauge on its carapace, another one on the third and a selection of cock and hen crabs appear too as we haul, mainly on the muddier ground, with the lobsters dominating the cleaner rock.
With several lobsters in the box, I set to work banding the claws as Ed hauls, making sure I at least contribute something to the morning. I’m encouraged to see the number of smaller, undersized fish (or “Nancies” as my father used to call them) that we return unharmed to the water. One more “shed” or moult for those specimens and they themselves will be going ashore.

Ed and his brother Rob (out too this morning, fishing for cod and skate over the horizon) sell most of their catch locally. Dave Hicks of SpringTide Fish, right by the jetty, buys as much local fish and shellfish as he can from the Butters’ and the other Ferry fishermen with most of the residue travelling the 50 miles by road to the auctions at Lowestoft. Dave’s business at the Ferry is another rung on the sustainability ladder of this vibrant little community, as customers flock year round to his hut to purchase a range of fresh, top quality seafood, keeping money and value within the locality.

The wind freshens now as the sun gets up and Ed skilfully re-shoots all the pots back in their correct rows rebaiting each one with the standard salted herring, caught in the same waters months before. The inshore seas of this coast are alive with herring at present, although they currently attract little premium, being now “spent” after spawning, sustaining only hungry cod and bass before they once more, move off to deeper water.
The final pot disappears over the gunwales and we make for home on the last of the flood. An exciting morning with a fascinating and hugely nostalgic insight into low-impact and selective fishing carried out in time-honoured fashion using techniques which the years have failed to erode. 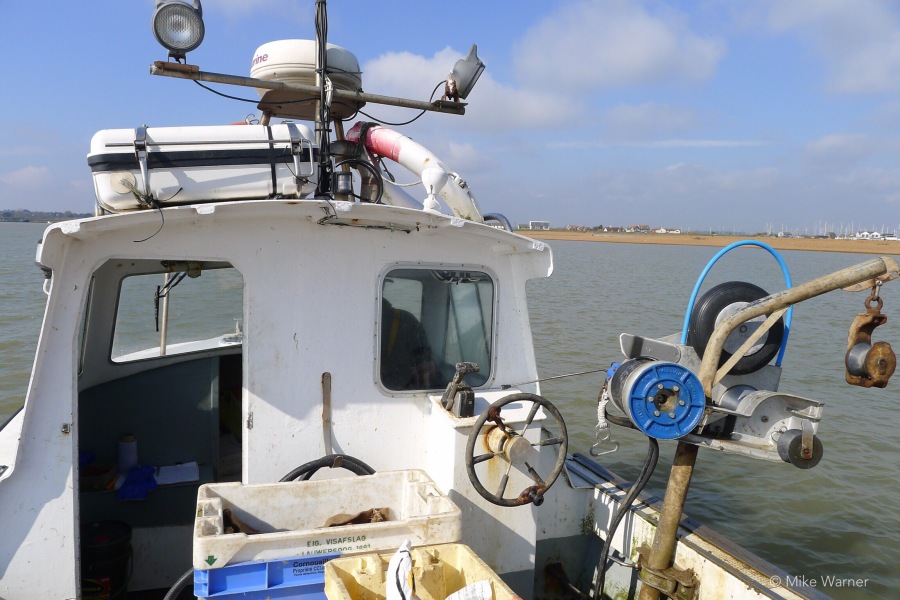 As we tie up and decant the catch into the “keep pot” on the mooring, I reflect on the emotions and feelings that have drawn me back here after so long. Saltwater is definitely in my blood and it runs stronger with each trip I make to harbours, markets, auctions and of course to sea. Fishing out of Felixstowe Ferry again, has crystallised this for me. I feel such a strong affinity for the place and its inhabitants and it has only further cemented my feelings and passion to be involved in supporting this bastion of the last wild hunters, as much as I can.

Sitting later with a coffee in hand, on the decking of the “Winkle” cafe overlooking the jetty, whilst waiting for Rob to come ashore and watching the different elements of this community at work and play, it’s easy to see why Felixstowe Ferry still thrives. It is sustainable. Fishing and its support services, manufacturing, retail, food service, tourism and recreation all combine beautifully here in a microcosm, on a relatively small but critically defined scale. 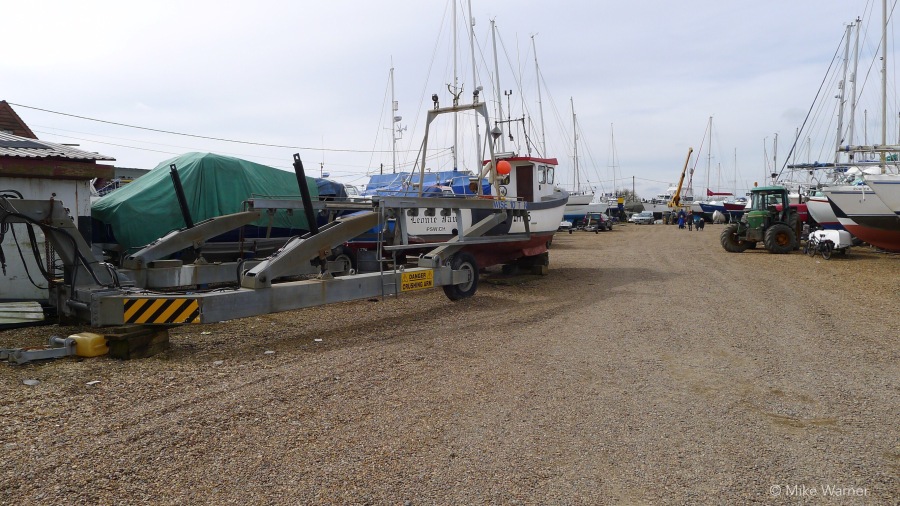 It’s truly amazing to both witness and experience and now even more so for me – I’ve just applied for a mooring.

5 thoughts on “Back to the Future ”